An Interview with Lisa Brackmann

Lisa Brackmann’s debut novel, Rock Paper Tiger, (Soho, 2010) sets an ex-military expat on the margins of the Chinese art world. The New York Times said it “gets off to a fast start and never lets up.” Rock Paper Tiger was listed as one of Amazon’s Top 10 Mystery/Thrillers and was nominated for the Strand Magazine Critics Award for Best Debut Novel. Her second novel, Getaway, is a literary thriller set in Mexico, will be published by Soho Press in early 2012.

A southern California native, Brackmann has worked in the film industry and as a singer/songwriter in an LA rock band. She took her first trip to China in 1979 and still spends a lot of time there.

EB: During your recent visit to Ashland, you mentioned that you always wanted to be a writer. Have you always written? When did you decide on the suspense genre?

LB: Pretty much always. I tell the story on my website, and it’s true, that my first attempt at a novel came when I was five years old and wanted to write an epic about cats who went camping. The problem was, I didn’t know how to spell “tent.”

I may have had stretches of years where I was in denial about it, like the period when I wanted to go into the Foreign Service, but eventually my true nature won out. I wrote my first long project (a screenplay) while living in China, started taking creative writing classes in college, got some encouragement from a couple of really great professors, and though I still had a few detours to go through over the decades, I wrote a lot and eventually settled down and got serious.

As for suspense, I‘m a huge mystery reader. Mystery is a genre that has a lot of practitioners operating at a high degree of literary skill—I mean, “literary” and “genre” can be a pretty arbitrary distinction, and there are just a lot of great writers writing mysteries. Mysteries offer a set of elements that give them an inherent structure, which not all strictly “literary” fiction has in my opinion (the kind where it’s often mainly about the quality of the prose above anything else). So while what I’m doing isn’t really mystery, I’ve always been drawn to genre fiction that sort of straddles that literary line.

Also, I’ve long had an interest in politics, and suspense in particular offers a lot of opportunities to deal with politics and “big” issues. Plus it’s fun to write!

EB: Rock Paper Tiger features Iraq war veteran Ellie McEnroe. Where did the idea for the story and for Ellie come from? 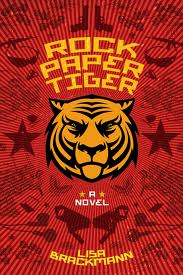 LB: Ideas are always kind of mysterious, but in this case, a big chunk of it was a blatant commercial consideration. I’d written a ton of stuff before tackling Rock Paper Tiger, but virtually none of it with the idea that I would write something that actually might have a shot at selling—I always pretty much wrote what I felt like writing without thinking of market realities ahead of time. So I examined what I knew about that might interest people, and I came up with “China,” specifically, modern China, for a setting. I hadn’t seen today’s China written about much in fiction by Western authors. I’d had some friends who were active in the art world there, and I’ve hung out on the periphery of the art scene in Los Angeles for years, so I thought that would be an interesting element as well, particularly when you look at the frequently political nature of contemporary Chinese art.

Finally I was angered by the Iraq invasion and the War on Terror, so I wanted to deal with that somehow. I was interested in what happens when a very powerful country like the United States abandons its Constitutional principles and rule of law. In my opinion, you end up with power that is poorly restrained and authority that can be arbitrary, which is what you see in China.

The trick was getting these very disparate elements to somehow work and play well with each other. So that’s where Ellie came from—a young woman and accidental Iraq War vet who finds herself adrift in Beijing, hanging out with a Chinese artist who suddenly disappears, leaving a lot of questions in his wake and a lot of scary guys chasing after Ellie for answers.

EB: You called it an existential thriller. How so?

LB: Aside from the more conventional thriller elements—“Will Ellie outwit her opponents and survive this bad situation?”—a lot of her dilemma is about whether she’ll survive her own self-destructiveness, come to some kind of terms with her past and find a home in the world.

EB: You’ve been visiting China almost since it opened to Westerners. How did you get interested in China?

LB: Complete coincidence! A high school friend of mine’s parents were among the first group of Americans to teach English in China since the founding of the People’s Republic, and my friend asked me if I wanted to go with him to visit them. I was at the age where my response to a lot of things was, “Sure, sounds like fun,” so I went. I ended up staying six months. This was in 1979, and the experience had a profound impact on my life. I think my first few visits back were a sort of excavation of my own past, trying to understand how the experience affected me. After that, I think it’s because I feel comfortable there, and more importantly, engaged. China is many things, but “boring” isn’t one of them.

EB: What sort of research was involved in Rock Paper Tiger? I imagine that it must be difficult to research some things ? Did you visit the sort of sketchy locales that Ellie finds herself in?

LB: I have been in both karaoke bars and in a candidate for the dive-iest Internet café in Beijing, so in terms of sketchy places in China that are in the book, I’ve been in at least rough equivalents of most of them. I also deliberately set the book in China locations with which I was familiar.

Iraq was another story. Obviously it wasn’t the kind of place I could just pop in on in the middle of a war and a civil war. I do have a friend who had been there both before and after the invasion, however, and I’d done some editing of pieces that she’d written about her experiences. During that process I would ask her for specific sensory details, to make the pieces more visceral for readers. All that came in handy a couple of years later when I was working on Rock Paper Tiger.

For the rest of it, I just did a lot of research: many, many articles, books, blogs, documentaries…I started very broad, because I was trying to portray a world with which I was not personally familiar, and I didn’t always know what it was that I needed to know. After I’d immersed myself in it, it was easier for me to target specifics. I hope I did a decent job. I have had a few vets ask me if I’d been in the military, including one army medic who asked if I’d been one, so that made me feel good. On the other hand, one woman who was an army officer read the book and was absolutely furious, claiming I’d set back the cause of women in the military by ten years. So there you go.

EB: You worked in the LA film industry and as a songwriter. How have those experiences influenced your writing?

LB: Creatively, the film stuff led me to focus on something I already naturally focused on in writing, which is how to set the scene using relatively sparse prose—you have to keep the narrative very tight in screenwriting. I work very visually; place is important to me, and I also see characters as people I’m observing. I don’t generally sit down and write out character sketches/motivations until well into the process, it’s more like I’m watching them and trying to figure out what they’re like. Also, screenwriting is great training in writing dialog that captures different characters’ voices. Writing dialog isn’t about reproducing realistic speech; it’s about giving the illusion that you’re doing so.

With the songwriting, it encouraged me to focus on the more rhythmic aspects of the prose. I’m not a poet, and I don’t think my lyrics were brilliant or anything, but I do like to think that there’s a certain musicality to my writing that comes through.

Also, both of these experiences were really good preparation in the more collaborative aspects of publishing. One of the reasons that I wanted to write novels instead of screenplays was that I had more control over the work—a screenplay is a blueprint for a film; a novel is its own end result. That said, if you’re going to work in traditional publishing, you have to accept that you don’t have total control over the process. Agents and editors are going to have input into the writing and the story, you don’t get to choose your own cover, you really have to be open to working with other people as a part of a team. Being involved in film/TV and seeing how that process works and being in a band where other people are adding their own creativity to your songs and you’re playing them together is pretty good training for that.

EB: You’ve got a story in Akashic Books’ San Diego Noir? Which is more noirish, China or San Diego?

LB: Definitions of “noir” vary, but I went with “Man/Woman meets Man/Woman who is not good for him/her, and things go terribly wrong.” I think you can find noir in both China and San Diego—wherever you have people who are self-destructive, possibly down on their luck and in over their head, you have a setting for noir.

EB: You next book is a standalone set in Puerto Vallarta, Mexico. Can you tell us a little about that?

LB: Well, speaking of noir, my working title for that book was Puerto Vallarta Noir—I never considered that to be a candidate for the actual title, but that’s how I thought of the book. And in it you have an American woman whose real estate financier husband has died, and she discovers that he was running a financial scam and has lost all their money, so she’s at a crisis point in her life on multiple levels. She takes an already paid-for vacation in Puerto Vallarta to get her head together, meets an attractive guy on the beach, they go back to her hotel, and yes, things go terribly wrong. The story is also about the intersection of drug cartels, political power, and corruption on both sides of the border. It’s called Getaway, and it will be published in May 2012.

EB: And will Ellie McEnroe be back in a future book?

LB: I’m working on an Ellie book now—a lighthearted romp through political crackdowns, environmental apocalypse, religious cults and GMOs. You finally get to meet her mother, among other things.

1 Response to An Interview with Lisa Brackmann