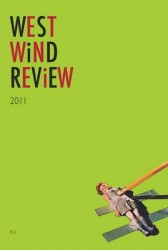 Sarah Cunningham is a creative writer, editor and photographer, who will be graduating from Southern Oregon University soon. She has travelled to Japan and has an interested in lomography, among other things. Sarah was the editor of the 2011 West Wind Review.

EB: How did you come to be the editor of the West Wind Review?
SC: I applied in the Spring of 2010. I was interviewed by Kasey Mohammad (faculty editor), Karen Finnegan (Director of Student Publications) and 2010 student editor Greta Mikkelsen. I received a wonderful email that same day, saying I was their unanimous choice.

EB: What are the editor’s duties?
SC: Reading through the bundles of submissions we get during the summer (our current submission period is July 1st through August 15th), choosing what is accepted/rejected, deciding the order of the book, laying it out through InDesign, and of course getting it printed on time for the annual AWP Conference. A big part of the job is attending the AWP, held in a different city each year during spring, where West Wind has a table at the gigantic book fair. There, we sell copies and represent not only the journal but SOU as well. All of the duties are of course done side by side with Kasey, thankfully.

EB: How much time did all that take?
SC: The longest thing is narrowing down the submissions. We did this in phases, the last of which was the hardest because it came down to us having a lot of really great pieces that perhaps didn’t fit into the overall wholeness of the issue. Another thing that ends up happening is we find, say, a mediocre poem, but one that has a really fantastic few lines in it; it’s extremely hard with some pieces to draw the line of what is good enough and what doesn’t quite make it.

EB: What’s the training like? Do you consult with past editors?
SC: Yes. I had Greta as a mentor the last couple months of Spring 2010, sharing her experiences and insight with me. I wouldn’t call it *official* training of any sort, but her words were invaluable to me. The biggest thing was, as editor-in-training, I attended the AWP that year as well. This gave me a taste of what to expect and a lot of preparation for running the book fair table the following year.

EB: Where do submissions come from?
SC: The West Wind audience–and therefore, group of submitters–has definitely grown these past few years. We attribute this to the journal going from being somewhat unorganized and without a theme to now having a particular aesthetic it aims for–that is, experimental/contemporary writing, such as work coming out of an avant garde tradition–and therefore representing a stronger literary interest as a whole. The journal has really come into its own, I think, and Kasey has of course had an influence there. But I see this influence being extremely beneficial for the sake of putting out a really solid, strong literary journal. Before, submissions were highly regional; now, they are definitely nation-wide and even worldwide: we’ve received work from Japan, Poland, Australia, Ireland, and a lot from Canada, just to name a few places.

EB: And about how many submissions does the West Wind receive?
SC: I am so bad with figures like these, but I’d say we got a few hundred? At least 300? And that number has been slightly fluctuating these past couple of years: before Kasey came on as faculty editor, the journal was much less organized and lacked any kind of concentration or aesthetic preference. This meant that we received much more sort of blind submissions, just random poems and stories from people who very well probably had never held a copy of West Wind in their hands before. Now that the journal is coming into itself, with a preference for contemporary, experimental work, we are getting less of those bulk, generic submissions and much more from an audience that seems in tune with what the West Wind has become.

EB: Who selects the submissions to be included in the journal?
SC: The faculty editor and student editor. Which for the 2011 issue meant there were a lot of long days of sitting with Kasey, discussing why we liked certain pieces and what bugged us about others. It was very wonderful but also intimidating to be controlling what was going to get published and what wasn’t.

EB: What was the most challenging aspect of your work as editor? Rejecting submissions? Proofing?
SC: By far, the hardest part was when I would read a submission and not necessarily like it, but recognize that it was a strong, complete piece in itself that deserved to be published…just not in West Wind. I think most editors probably experience this: having to let something go that you just know does not belong in a particular journal, yet it feels like you’re saying no to something that you really shouldn’t be saying no to.

Another thing is, you really want to feel like you’re giving each submission the time and consideration it deserves. So for me, and I’m assuming for most editors out there, you are constantly sort of battling yourself during these long hours and days of sifting through hundreds of submissions, because along the way, you do get tired, you do start to pick up on things right away that may hint at a submission being really good (or really bad), and you do start to want to cut corners and make decisions based off of those quick first impressions. I would advise the next editor to start the reading process as early as she or he could, allowing themselves the time that each submission deserves to have. I think of how some parents, when they’ve given birth to their first child, may buy those really fancy diapers and think that they’re going to be doing everything for their child the long, hard, obsessive way; after a period of time, you know they realize the diapers get thrown away anyway, and their lack of sleep starts adding up, and they kind of just get to that point where they realize they don’t have to do everything 110% because it doesn’t always make a difference. Somehow, I’ve compared our submissions to diapers…but the point is, I think integrity is good and you should be respectful of each submission, while planning ahead your own schedule of reading so as to not overwhelm yourself with too much reading at once, either. Though I know some people might also feel that it’s unrealistic and unnecessary to give each submission the full 110%.

InDesign can also be tricky and headache-inducing, but coincidentally during the period where we were doing the majority of the layout work, I had prior engagements to be in Japan for those weeks, so Kasey handled most of that part this year.

EB: What did you find most surprising about being editor?
SC: That I have a copy of a journal that I really, really respect and enjoy, sitting on my bookshelf, with my name inside the cover. It’s sort of odd and really humbling to be able to say that I helped published people who I have crazy respect for–people like Gregory Betts or kevin mcpherson eckhoff–people who I am actively reading myself. It was a great experience to realize that, with the passion and interest and education that I do have, I was able to simply “become an editor,” just like that.

EB: The West Wind covers are always interesting. Were you involved in the cover design?
SC: Unfortunately, I did not have anything to do with this year’s cover design. But yes, ideally the student editor and faculty editor work on this together.

EB: Has editing the West Wind influenced your future career choices at all?

SC: I already knew editing was something I was interested in pursuing, and getting to edit the West Wind definitely reassured my interest in it. It was a great first experience, fairly user-friendly since I had both Greta and Kasey to help guide me at different points in time, and enough for me to feel like I built up some editing muscles that I’m now eager to go stretch in other places.

EB: What’s your ideal job?
SC: If I knew that, I’d be doing it right now. It probably involves writing, editing, photography and traveling, all in one position. Let me know if you hear of anything, OK?