Poet, essayist and film-maker David Lau, the coeditor of Lana Turner: A Magazine of Poetry and Opinion visted Southern Oregon University on May 19 for a series of readings and informal visits with students. Lau writes what could be called unorthodox or in his own words ‘unprecedented’ poetry and he has published a collection of short stories called Virgil and the Mountain Cat and his work has appeared in such placeas as The Boston Review and The New Orleans Review. David was nice enough to sit down with me after his reading and answer some questions about his poetry and his experience in the publishing world. 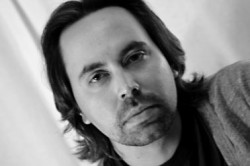 BR: When did you start writing poetry?

DL: I started writing poetry when I was probably 14 years old, 13 or 14. I wrote through high school. We had a poetry club called The Revolutionary Beet Society in my high school. I kind of transitioned into taking writing classes as a college freshman at UCLA. I’ve written pretty steadily since then.

DL: I think that my early poetry was mainly about girls. I also did read some interesting poets so I had models to imitate that were more complex than that and I tried writing in different kinds of ways. There’s a way in which my earlier influences, Allan Ginsberg, Amiri Baraka, remain with me, even if the poetry’s changed a lot.

BR: Who has influenced your writing?

DL: Yeah, when I was young I read a lot of things but the things I encountered on my own that I liked were the Beets, William Blake, Amiri Baraka, and Kafka I read in high school. There were a few other things I read when I was very young that were important to me, and then in college I probably took on the work of John Ashbury in a big way. That remains a pretty seminal influence on my work. Also a poet like Michael Palmer. There’s been a lot of influences over the years.

BR: When were you first published as a poet?

DL: The first time I published poetry was in college. I sent out some work to some contest for poets and writers. I really had no idea what I was doing but I won and was published in a small magazine in Missouri. Then I began to send out work after I finished my MFA and published in slightly larger, some cases very well known, magazines. That was mid ‘20s, 26 or 27. I don’t think you have to worry about getting published too much. To me publishing is a very fraught and difficult question. There are many things to do before publishing. Figuring out how you want to write and really trying to know your own writing is a real challenge. Publishing, one does it but to what effect and to what end is not always totally clear. I myself am cautious about publishing work.

DL: We live in a time when there’s a kind of abundance of publishing and I’m not always sure what it’s about. I myself have tried to send out only work that I felt really strongly about and that’s taken me years at times.

BR: Do you have any tips for aspiring poets?

DL: I think it probably takes all kinds and I have friends who are great poets who are not the most voracious readers, but for my own experience, it’s meant a lot for me to pursue open ended reading endlessly. I think in our world of distraction, there’s a certain diffuse kind of depressive atmosphere. For me these are the kinds of things that help to make the world manageable, to take on reading projects. I find that I try to write when I feel like it’s really necessary, but reading is something I can do all the time. I’m always reading.

BR: Are you not always writing?

DL: Daily it’s a kind of activity. I know people who probably write too much and they’re too often generating, and I’m a little choosier about when I’ll sit down and get at things.

BR: Do you have a rigid writing method or is it flexible?

DL: I think that my sense is just trying to do things that are unprecedented. That’s my sense of what my method is. It’s almost like you don’t want to be wholly aware of what you’re doing. As you even become aware of it, I think most interesting artists and poets are skeptical of the things that they do. They’re pretty critical of themselves. Awareness of what you’re doing means that you’re often trying to do something else and go beyond what it is you’re doing, so I do try to do things that are unprecedented both for my own writing practices and for other things.

BR: Does anything block your ability to write?

DL: Not really, because I have enough of a habit of using notebooks and just using fragments of things to get myself going. I think having many notebooks and having things written down in many different spots is a way of always having some measure of things to write about or think about. Writer’s block is not something I’ve experienced myself but that doesn’t mean it’s not real or debilitating for people. There’s a dialectic of activity, writing in silence.