An Interview with John Hough, Jr. 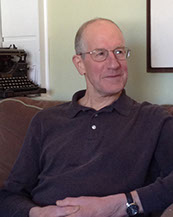 John Hough, Jr. is a graduate of Haverford College. He has been a VISTA volunteer, a speech writer for Senator Charles Mathias of Maryland, and assistant to James Reston at the Washington Bureau of the New York Times.

Hough is the author of six novels, including Seen the Glory: A Novel of the Battle of Gettysburg, winner of the American Library Association’s 2010 W. Y. Boyd Award, and three works of nonfiction. He lives in West Tisbury, Massachusetts.

We talked about his latest book, The Fiction Writer’s Guide to Dialogue: A Fresh Look at an Essential Ingredient of the Craft, recently released from Allworth Press.

EB: Tell us a bit more about your background as a writer and teacher.

JH: Writing is the only thing I’ve ever wanted to do, unless you count my boyhood ambition to be a big league baseball player. I published my first book when I was 22, a nonfiction account of my year as a VISTA volunteer in Detroit, and the books came at fairly regular intervals from then on, though I tend to be longer between books, having suffered some terrible dry spells, than many writers. I had married and settled on Martha’s Vineyard when a successful writers workshop here on the island came to my attention. I was between books, and to help make ends meet, I began offering classes in creative writing in our living room. Later I was recruited to teach plot, character and dialogue at seminars in Chicago and on Cape Cod for doctors and lawyers who wanted to write novels, put on by an organization called SEAK. I’ve also taught frequently in the adult education program here on the Vineyard.

EB: What prompted you to write this book? Were there things you wished you had known when you began writing?

JH: I was asked to write the book. A SEAK client who had attended a seminar I gave on dialogue later published a book of his own, and he recommended me for the job to his editor. I’d been teaching dialogue for years and thought a book on it would be easy. It was harder than I thought; I knew bad dialogue when I saw it, but I didn’t always know why it was bad. Writing the book forced me to discover why, and explain it—to present the writing of good dialogue as a technique, which I think it is.

EB: I had always thought that fiction writers got their best dialogue from listening to people talk. But it’s more complicated than that, isn’t it? 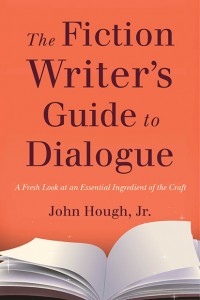 JH: When I teach dialogue, the first thing I say is, dialogue in fiction is not at all like dialogue in real life. In real life we digress, we ramble, we elaborate needlessly, we use three or four words, three or four sentences, where one would do. Dialogue in fiction has to be tight and to the point—relentlessly so. The trick is to make it sound real, sound natural. Having said that, I would never tell a writer not to listen to people talk. It’s where we get idioms, everyday usage, the interesting turn of phrase. It’s where we get the feel of how people talk. But we aren’t, as I say in the book, stenographers. We’re rewrite men—we take what we hear and condense it, make it compact. We give it shape and cohesion.

EB: You talk about bits of dialogue from all sorts of writers. How did you go about collecting the dialogue you wanted to use? Are you a dialect hoarder?

JH: Collecting examples for the book was the most fun part. Naturally I chose books and short stories that I love, and I was careful to keep a gender and ethnic balance among authors, which was easy. I went for what I hope is a delightful variety, from Melville and Twain to Elmore Leonard.

EB: You seemed to be having a lot of fun writing this book—not in a jokey sense, but in the sense of sharing an enjoyment in good writing. Should writing be fun?

JH: It certainly can be. There’s all the difference, though, between “fun” and “easy.” I’m suspicious of writers who write 10 or 15 pages a day; I think they’re having too much fun. Hemingway wrote two and a half hours a day and said he was “empty” when he’d finished. I know that William Styron, who composed in longhand, wrote three or four pages of legal tablet a day, never more. Graham Greene never wrote more than 500 words at a sitting. “There is nothing to writing,” Hemingway famously said. “All you do is sit down at a typewriter and bleed.” But no writer ever took more pleasure in his or her work than he did.

EB: I was fascinated by your discussion of voice as physical description. What did you mean by that?

JH: No character in literature is more alive and vivid than Huckleberry Finn, and yet Huck never tells us what he looks like. Students are surprised when I tell them that there’s no physical description of Atticus Finch in To Kill A Mockingbird, because they can see Atticus so clearly. Why? Because there’s character in his speaking voice, as there is in Huck Finn’s–a ton of character–and it prompts an image in our imagination. It’s a vivid image—face, bearing, even body type. There’s a brightness in Huck’s face of intelligence and slyness. He’s agile, mentally and physically. Atticus’s face can only be gentle, wise, touched faintly by melancholy. How much physical description to provide, or how little, is of course up to the writer—do you want to direct the reader, or leave it mostly, or entirely, to the reader’s imagination? The more I think about it, the more I suspect that there’s no better way than dialogue to create a character in the mind’s eye of the reader. Faulkner almost never describes his characters physically. Nor do Joan Didion and Cormac McCarthy.

EB: Is there a single most common problem with fictional dialogue?

JH: Yes: the absence of tension. Overt hostility aside, it’s difficult to define what comprises tension in dialogue. In the book I hit on the idea of suspense: neither the reader nor the characters should know, exactly, what is going to be said next. If you can anticipate the gist of a speech, then the tone or wording of it should be somehow unexpected. The idea of tension in a scene between friends or lovers who aren’t quarreling seems counterintuitive, but without tension, any narrative goes slack. It becomes uninteresting. Your characters, if only in some small way, have to keep each other, and the reader, off balance. Keep the reader wondering what will be said next. Keep your dialogue direct and economical. Dispense with the pleasantries we use all the time in real life. Nothing kills tension like “please” and “thank you.”

EB: As a linguist, I was fascinated by the discussion of dialects, accents and vernacular language. You describe it as setting speech to music. Can you elaborate for our readers?

JH: It didn’t occur to me until I was writing the chapter on accents and the vernacular that the only regional American accent that is regularly evoked in our literature is the southern. In print, Didion’s Californians don’t sound any different from John Cheever’s New Yorkers, or Anne Tyler’s Baltimoreans. A southern accent, of course, is more pronounced and distinctive than any other, and southern writers from Faulkner to Lee Smith color their dialogue with it, so that we never forget, linguistically, where we are. The “music” I spoke of resides not so much in pronunciation—Lena Grove says “sour-deens” for “sardines” and “fur” for “far” in Light in August—as in the arrangement of words along the line, which I compare to musical notes. Smith never alters the spelling of a word, as Faulkner does occasionally, but you can hear the elongate vowels and softened consonants of her Virginia hill people in the construction of their dialogue—the way Smith puts their words together, the way the words play out. Throw in a dash of vernacular and the occasional syntactical oddity, and there’s country music in every line.

EB: You list some great lines of dialogue in your book. Do you have an all-time favorite? Or a couple of favorites?

JH: In the book I listed the line from To Kill A Mockingbird that gives the novel its title, but there’s another line in the book that moves me even more. Tom Robinson has just been convicted, and Atticus has tried to comfort him and is now making his slow way down the aisle of the courthouse. His children, Jem and Scout, have watched the trial from the balcony, where African Americans are required to sit. This is from the novel, narrated by 12-year-old Jean Louise, or “Scout”:

“Someone was punching me, but I was reluctant to take my eyes from the people below us, and from the image of Atticus’s lonely walk down the aisle.

I looked around. They were standing. All around us and in the balcony on the opposite wall, the Negroes were getting to their feet. Reverend Sykes’s voice was as distant as Judge Taylor’s: