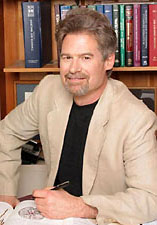 Dr. John Kalb is a Chiropractor and Wellness Coach practicing in downtown Ashland, Oregon.  He is the author of two books, Steamed Greens for the Spirit and his new one, Winning at Aging, which will be on shelves in June and available from Amazon in September.  Dr. Kalb’s book has been given a rave review by Harold H. Bloomfield M.D., who has had 14 books on the bestseller’s list and been a guest on Oprah and Larry King.  Bloomfield’s review reads: “Dr. John Kalb’s book is a veritable treasure trove of powerful, practical strategies and advice for youthing and aging gracefully. Please, do yourself a favor and read it.”

MR: What is your educational background?

JK: I received my Bachelor’s of Arts from New York University as part of a Pre-Med program.  My major was Psychology and my Minor was in Chemistry.  For Graduate school I attended the University of Buffalo and got an Interdisciplinary Master’s of Science in Natural Science and Math. My concentration was Organismal Biology but I usually say Developmental Biology because no one seems to know what “Organismal Biology” is. I’ve also done post-graduate training in herbology, clinical nutrition, and gerontology.  Later on I decided against the medical profession and started studying alternative and natural healing.   This led me to Chiropractic Medicine and acupuncture.  I graduated from Western States Chiropractic College in 1981. I teach a wide range of workshops on successful aging and on physical and emotional healing.  I’m also certified to teach secondary school, grades 7-12, in math and science from U of B.

MR: Why did you decide to supplement your current career as a Chiropractor with writing?

JK: The biggest reason was that I got frustrated with patients coming back with the same problems and asking me for advice about healthy lifestyle changes, for instance, how to exercise, stretch, and change their diet.  Most people would self-sabotage and weren’t following through with what they knew they should do or wanted to do to improve their lifestyle.  From my psychological training, and other workshops I had taken, I came up with a process to help people over come that state of mind.  I called it the “Wellness Process” in the first book and the “Self Sabotage Solution” in the new book. This process was the basis of “Steamed Greens for the Spirit,” which I self published in 2004.

MR: Why did you self publish your first book?

JK: I wanted to get it out quickly and I didn’t think I had a great chance of getting a professional publisher.  I didn’t know if I wanted to go through mailing out query letters and the manuscript and getting all of the rejection letters I that I suspected I might get.

MR: What has it been like working with White Cloud Press to publish your second book, “Winning at Aging?”

JK: Overall a great experience, but it is taking longer than I would like working with them because of the nature of the publishing industry.  I chose them because they are local, have high integrity, and I really trust them – they believe in what they are doing, and I believe in what I am doing.  They have the extra keys to help me make a better book – formatting, book cover, positioning of the book – their expertise is invaluable.  Also, I want this book to go outside our local valley and have a wider reach than my first book.

MR: How did you come to work with White Cloud Press?

JK: I mentioned my book to an acquaintance and he offered to talk with Steve Sendar and tell me if he was interested in my project.  Then I sent Steve Scholl a pdf file of my book.  It was mostly written by the time I got it to them and in pretty good shape.  We have been negotiating for quite a while to come up with a contract, because according to the big boys I’m an unknown, so they don’t want to take any risk on me.  Right now we have a hybrid arrangement where I am paying for the production costs and they are providing their expertise and their marketing channels.  The book should be to the printer by the end of the month. We’re working on the book cover designs now.

MR: How does self-publishing differ from working with a small, local press and which process do you prefer?

JK: I like it better than self-publishing because there is a lot less busy work.  Self-publishing involves a lot of footwork.  I sold my first book to patients and people in workshops.   White Cloud does more internet media, social marketing and book touring.  I’ll be touring a lot more, from going to Author’s Night at the local library, to doing a signing and reading at Bloomsbury.  I’m also planning on going to Portland, Seattle, and Bellingham in the summer and to California in the fall and possibly to New York.  My book comes out on Amazon in late September.

MR: How long have you been writing?

JK: My first book was written in 2003, I have also written newspaper articles and newsletters for patients.  What has really improved the second book is that my wife has taken UC Berkley’s online certification in copyediting, a four module course that is well respected around the world.  She has taken the course and editing the book while I was writing it.  I also have friends who are good writers who have turned me on to a few books that have helped my writing.  The feedback I’m getting in particular from a Professional Writer/Ghost Writer friend is that my writing has greatly improved since my first book.  Also, my father was an English professor but he was a frustrated writer, so I suppose I’m carrying on the tradition.

MR: What is your writing process like?  (How many hours do you write per day or where do you most like to write?)

JK: I’m really not that disciplined. I only work five half days per week at my chiropractic office and have more free time.  I only type with two fingers, it wasn’t until about a year and half ago that I got voice activated dictation on my computer, and that really helps. I write in my off time. When I am really inspired I will write before work, after work, and on the weekends.   When I went through a period where I was uninspired or blocked and I would use that time to research until I got a really good idea and became inspired again. The beginning of each chapter is really hard because it’s like having blank page syndrome; I really had to wait until I got a good idea, an angle, a creative spark.  A chapter feels like a whole book, I had to have a direction for it.  That was challenging.  Once I got the idea it would flow out really well.  At certain times I managed to write and say things that I had no idea where it came from. I would get into an elevated state of inspiration and these great words would just fall out.  I guess my writing habits are determined by inspiration striking and in between those times I would research.  I also feel that keeping healthy is part of my writing; I keep my body, brain, emotions and spirit as healthy as possible.

MR: What type of writing do you most enjoy?  I know that you have published several articles on health, but have you expanded your horizons to any other genre?

JK: So far just this field.  I write a little poetry on and off just for fun. I am kind of fantasizing about writing a play or a movie or a novel but that is pretty farfetched at this point.  I am thinking of writing a series of health books.  I try to take things one at a time, this is only my second book but I may be co-writing another book with a medical doctor on balancing stress, toxins, and hormones.  The first thing I ever published was my Master’s experiment in a peer reviewed journal in 1974.  Being a writer is a role I’m just starting to feel comfortable with, but I hope it will be a big part of my future.

MR: Being fairly new to the writing and publishing business, where do you think the future of books is headed?