An Interview with Margalit Fox

Posted on September 3, 2013 by Ed Battistella 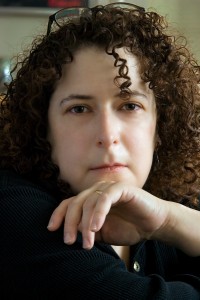 Margalit Fox is a New York Times journalist originally trained as a linguist. She holds bachelor’s and master’s degrees in linguistics from Stony Brook University and a master’s degree from the Columbia University Graduate School of Journalism. Her journalistic work has been anthologized in Best Newspaper Writing, 2005 and was featured in The Dead Beat (HarperCollins, 2006), the recent popular book by Marilyn Johnson about the pleasures of obituaries. (She has written the Times obits of Betty Friedan, Wayne C. Booth and Paul Ricoeur, among others.)

She is the author of Talking Hands: What Sign Language Reveals About the Mind (Simon & Schuster, 2007), which features first-hand reporting “signing village” of Al-Sayyid in Israel. Her latest book is The Riddle of the Labyrinth: The Quest to Crack an Ancient Code, published this year by Ecco Press/HaperCollins, which tells the story of decipherment of the mysterious Bronze Age script known as Linear B. It is a tale a lost civilization, scholarly obsession, and the detective work that goes into unraveling an unknown script.

EB: How did you get interested in the story of Linear B?

MF: I’ve always been interested in language (I have bachelor’s and master’s degrees in linguistics from Stony Brook University, where I studied with Mark Aronoff), and I’d been vaguely aware of the story since I was a teenager, probably from hearing people talk about John Chadwick’s book, The Decipherment of Linear B. And to my adolescent self, the story of a curious script from the ancient past, deciphered by a dashing young amateur, Michael Ventris, who died suddenly and mysteriously just four years later, at 34, was the stuff of high romantic drama.

EB: How did you learn about Alice Kober, the Brooklyn College professor whose work I had not been aware of her contributions?

MF: Very few people — including me — were aware of Kober’s contributions. After my first book, Talking Hands (which is about the work Mark, Wendy Sandler, Irit Meir and Carol Padden are doing on Al-Sayyid Bedouin Sign Language, an emerging sign language in an isolated deaf Bedouin community in Israel), was published, I cast about for another subject that might be suitable for another narrative nonfiction book on language. I was leafing through one my favorite reference books, The Blackwell Encyclopedia of Writing Systems, and by chance it fell open to the entry on Linear B. At that juncture, the story I envisioned telling (which was the only story that I and most other people knew) was the story of Michael Ventris. The primary archive in this country for papers relating to the decipherment is that of the Program in Aegean Scripts and Prehistory at the University of Texas at Austin. I cold-called the archive and told its director, the eminent Mycenologist Thomas G. Palaima, who I was and what I wanted to do. Tom said: “It’s a godsend that you called when you did, because we’ve just finished cataloging the papers of Alice Kober.” To which I replied, “Who?” That was how I learned about Kober, and I confess that I spent about 24 hours gnashing my teeth because my entire conception of the book had just been upended. But as soon as Tom told me her story — how she was truly the unsung heroine of the Linear B decipherment and how, after her untimely death in 1950, two years before the script was unraveled, Ventris cracked the code using the methods she had devised — I was hooked. So if The Riddle of the Labyrinth does nothing else, I’m very proud of the fact that it has helped bring this long-overlooked chapter in American women’s history to light.

EB: I was sad that Kober died so young. What impressed you the most about her?

MF: As I say in the book, “the snap and rigor of her mind,” and the fact that, working in the 1930s and ’40s, she was very much the lone woman in a man’s game. She was such a scrupulous scholar that she adamantly refused to speculate on either the underlying language of the Linear B tablets or on the sound-value of any character — both things that most decipherers, Ventris included, indulged in heavily. Her immense contribution, both to Linear B and to archaeological decipherment in general, was to develop methods for analyzing the characters of an unknown script writing an unknown language in the abstract, absent both phonology and meaning. And it was just these methods that let Ventris ultimately decipher the script. I also greatly admire her tenacity: During the severe paper shortages of World War II and afterward, she kept her voluminous statistics (frequency counts and the like) on a series of some 180,000 ersatz “index cards,” which she hand-cut from any spare paper she could find — examination blue books, old greeting cards and a great many checkout slips she pinched from the library at Brooklyn College.

EB: I was impressed with the clarity of the description of the decipherment process, and the way you used examples like Blissymbolics and Conan’s Doyle Dancing Men cipher to illustrate the basic principles. Was explaining the decipherment the most difficult part to write?

MF: Yes and no. On the one hand, I knew going in that if I made the explanation of the decipherment either too difficult or too boring, I’d lose the reader instantly. On the other, it happens that I’m a process freak, so in that respect this book was pure heaven for me. My favorite genre in crime fiction, for instance, is the police procedural, and in The Riddle of the Labryinth I promise readers a paleographic procedural, taking them a step at a time through the actual A-to-B-to-C work of deciphering an unknown script used to write an unknown language. I just had to be careful not to lose sight of the fact that besides writing (I hope) a ripping good yarn, I had certain pedagogical and heuristic tasks to attend to as well.

EB: Both Alice Kober and Michael Ventris, the British architect who completed the decipherment process, seemed obsessed, if not obsessive. Is that what made them able to the necessary advances? What do you attribute their success to?

MF: A combination of deep native intelligence, tremendous facility with languages (this was especially true of Ventris, who seemed never to have exited his critical period), the acute ability to recognize patterns (the discovery of orthographic — and therefore morphological — patterns in the texts is truly the only way to attack the problem when both language and script are unknown), and, yes, an intensity of purpose that dovetails pretty neatly with obsession. 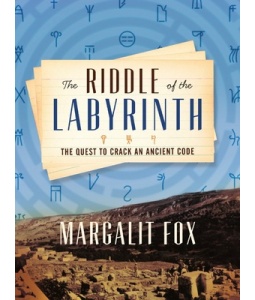 MF: It was certainly a bit of a practical challenge from a production standpoint, though my task and my publisher’s were made much easier by dint of my doing this book in the electronic age. Where Arthur Evans had to commission special fonts to be cast in lead so that his publisher could typeset Linear B, today we have several different electronic fonts from which to choose. The Web site omniglot.com was invaluable in making me aware of the various fonts with which we could set not only Linear B but also Linear A and the Iron Age Cypriot script. So all I had to do was install the fonts, and using BabelMap to input the characters, just drop them into the ordinary Word document that was the manuscript of the book. The Dancing Men font was designed by a man in Minnesota named Tyler Akins for his Web site rumkin.com, and he not only gave us permission to use it but also graciously developed a high-resolution version specifically for reproduction in the book.

EB: What was the most surprising thing that you learned in doing the research?

MF: I would have to say the extent of Alice Kober’s contribution. She is certainly mentioned in some sources, including the Chadwick, but because her private papers — a good thousand pages of her correspondence with other Linear B scholars, plus her 180,000 cards and other materials — were unavailable until recently, the full scope of her work on Linear B could not be known. Until then, historians of the decipherment had only her few published papers on which to draw. She was such a careful scholar that she husbanded each paper for ages, rewriting and rewriting, until she was absolutely certain the thesis articulated in it was correct; as a result, she published very little. Worse still, she died at only 43. As a result of the serendipitous timing of my phone call to the archive in Austin, I happened to be the first person to have access to her full archive, which made all the difference in being able to illuminate the full extent of her contribution to the decipherment.

EB: Any recommended reading for people who want to know more about Linear B?

MF: The Chadwick, certainly, which was published in the 1950s, and Andrew Robinson’s biography of Ventris, The Man Who Deciphered Linear B, published in 2002.

EB: Have you decided on your next project yet?

MF: It’s also narrative nonfiction — the only genre I seem to be capable of writing — but in other ways it’s quite a departure for me. Each of my first two books entailed my taking a year on the front end to learn a language: ASL for Talking Hands and Attic Greek for Labyrinth. While both experiences were immensely pleasurable, they added way too much time the delivery of the manuscript. The new book, which will be published by Ecco Press/HarperCollins, the publisher of Labyrinth,” is a narrative account of a historical murder case. That’s all I’m allowed to say, or else my agent and editor will murder me!