An Interview with Gail Fiorini-Jenner

EB: How did you get interested in the mythical State of Jefferson?

GJ: I’ve always loved history and marrying into a 4th generation cattle ranching family, moving onto the family ranch, I stepped into history. My major was Anthropology with minors in English and Social Science, so I have always enjoyed learning about people and history. I taught history and English for many years here in our local high school and jr. high, so again, I spent a lot of time doing research, etc. My first book was a novel, based on an historical event; it won a 2002 WILLA Literary Award. At a writer’s conference, I met editors from Arcadia and they encouraged me to submit a proposal for a local history book. That first one was on Western Siskiyou County and I co-authored it with Monica Hall. Then, in visiting with Bernita Tickner, local historian, we began visualizing other titles that Arcadia might like. When we decided on “the State of Jefferson,” we were amazed at their response. So began the next 10 years of collecting stories and information and photos, etc. We have written three books on State of Jefferson for Arcadia now and one for another publisher on the Historic Inns and Eateries in the State of Jefferson. That book was fun because we both love/loved cooking and it features an entire chapter of recipes from the locations featured in our book.

EB: You written three books for Arcadia Press about the State of Jefferson. What’s the difference in the three books? 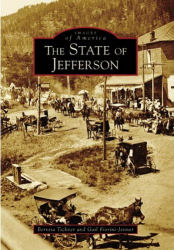 GJ: The first book is the strongest history on the “events” linked to the history of the State of Jefferson movement, which is actually rooted in the 1850s… although it’s the later history and “movement” most people connect to. The second book features locations, “then and now,” and the third is a wider assortment of photo postcards representing the region. With each book we did try to incorporate places not covered in the other books, but of course, there are places that are so fully connected to the State of Jefferson that they are prominent in all three books, eg: Yreka, Ashland, Klamath Falls, Salmon River, etc.

GJ: I think the “Jefferson” state of mind is the strongest aspect of the “actual” State of Jefferson. It is linked to our environment, our historical links to the events and industries rooted in the past, eg: ranching, logging, mining, and to the separateness that we feel – from the rest of California and/or Oregon. There is clearly an independent spirit here, one that does not blend easily with the attitudes and intervention by agencies, etc., that many in our respective states feel you can’t live without. We WANT to live “without” that kind of intrusive, big brother narrative. We like our lifestyle and want to preserve it; people here love the outdoors and the mountains and the rivers. Even if we are miles apart in our political leanings, people still relate on that level throughout this region. 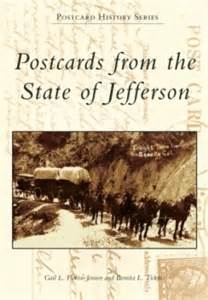 EB: I just finished reading Postcards from the State of Jefferson. Where did you find the wonderful real photo postcards? And how did you choose the photos to include?

GJ: Actually, Bernita and I both had a host of old postcards. I began ten years ago to collect my own and have rummaged through old stores, thrift stores, antique stores, and on the internet. People have given some to each of us, as well, and both of our families (being generations settled here) have a number of them. Again, the idea was to try and bring in some areas of the region not well covered, so we tried to select postcards that represented those places. Next, we tried to find postcards that “spoke” to us – either because of the event or people or location.

GJ: That’s not easy to define. The photos and postcards truly do “speak to us” and as we sorted through them, we’d number them according to location and/or geographic importance. Next we’d go through them and select the ones that seemed most interesting or unique. We actually had to eliminate so many wonderful postcards and/or photos that we still have dozens and dozens of great ones. In this last book, Bernita was the one to select the organization – by seasons. We had done chronological and regional breakdowns so this seemed in keeping with the nature of our region. We have some distinct climate and seasonal differences and we thought that made sense.

EB: You are a writer and a rancher. What’s your writing schedule like?

GJ: Crazy! Erratic! I write when I can but once I start on a project, I’m working late and early. A part of me is always “engaged” whether fantasizing, organizing, writing, researching, reading, rewriting, critiquing, editing – the process goes on and on. I seem to have a part of my brain that is always tuned into observing and planning or creating. I can’t seem to shut that part of me “off” – even when I’m doing mundane things. Summers are actually hardest because I have a large garden and with haying and the schedule the guys keep, plus having grandkids around – which I relish – time is much more limited.

EB: You’ve been an English teacher in the past. Have you always been a writer?

GJ: Actually, yes. My twin sister and I “wrote” a play in the 4th grade – which the teachers allowed us to direct and do for the entire school; it was called “The Princess Who Could Not Spin.” I wrote poetry as a young girl and sometimes stories. But I loved history and biography. In the fifth grade, I started reading every biography in our library – I think I got around to the “P’s” before I left 6th grade and moved over to another school. People and their personal history are the essential focus of any fictional story so that fiction really is “real”. I sold my first article in the 1980s but didn’t see myself as a novelist or author of histories for another few years. My first novel began as a nonfiction project, but I couldn’t locate enough primary material and the novel grew out of that. I have since written a second historical novel, too, on Black Bart – California’s most successful stage bandit. It’s a YA/”crossover” novel and it’s actually the first novel written about him.

EB: You seem to have a lot of projects in the works. What’s next?

GJ: Another YA novel, set against World War I; two screenplays; an anthology of collected essays written by myself and other rural women (that will be coming out at the end of 2013/first of 2014 from Globe Pequot Press), and other stories. Plus I write for Jefferson Public Radio’s “As It Was” historical series and for JEFFERSON BACKROADS, so I am always on the hunt for good old stories and history.