An Interview with Sharan Newman

Sharan Newman is the author of the Catherine Levendeur mysteries, 10 historical mystery novels set in 12th-century France. She’s also published three mythbusting “Real Histories” from Berkeley Books, a trilogy of fantasy novels featuring Guinevere of Arthurian legend, and a mystery set in 19th century Oregon. She has coedited a series of anthologies on Crime Through Time and published a collection of short stories titled Death Before Compline.

The research for her books has taken her to, among other places, the Bibliothèque Nationale in Paris, the Centre National de la Recherche Scientifique France Méridionale et Espagne at the University of Toulouse and the Institute for Jewish History at the University of Trier. Sharan Newman has a Ph.D. in medieval studies.

She is currently working on a biography of Melisende, the first native-born queen and first female ruler of Crusader Jerusalem.

EB: How did you become a mystery writer?

SN: I had been writing fantasy but realized that I was reading more mystery. Then I came across an historical puzzle that seemed perfect for a mystery. 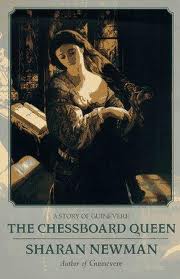 EB: What was that?

SN: In his account of the building of the abbey church of St. Denis, Abbot Suger wrote that the nobility had thrown jewels and gold chains into the mortar of the cornerstone. But archaeologists found no trace of them. It was when an engineer told me how long it took mortar to set back then that I realized there had been a chance for some skullduggery. The question was, by whom. The mystery started unfolding from there.

EB: Your first series featured Queen Guinevere. How did you decide on the character of Guinevere as series focus?

SN: I had taken three terms of graduate courses in Arthurian literature. At the time (early 80s) there was almost nothing on Guinevere, either in fiction or academic work. She always came across as super-bitch. I began to wonder why and the story grew from that.

EB: What accounts for the continuing popularity of Arthurian legend? And for our fascination with medieval times generally?

SN: Arthur is infinitely mutable to the era. The idea of a man who tries to create a perfect society and fails is very compelling. People seem to be fascinated with medieval times because they have no idea what they were really like; most people base their interest on either positive or negative myths. (Don’t get me started. This is a hobby horse of mine.) 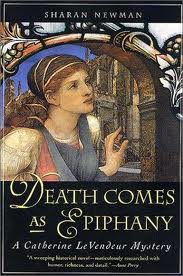 SN: It wasn’t an order but a Benedictine convent, rather unorthodox. It was founded by Peter Abelard and given by him to his wife, Heloise. The 16th century convent still exists as a private estate in Champagne.

EB: So far there have been 10 books in the series. How does Catherine develop over the course of the series?

SN: She grows up, has children, becomes less clumsy and more aware of the world. Rather like her creator.

EB: Did she take on a life of her own, or were you always in control?

SN: My characters are constantly bolting from me. Catherine is better than most but the men are always surprising me. I hadn’t thought about it in terms of gender before but I do find the men harder to predict. Hmm… I need to think about this.

EB: You’ve got a PhD in medieval studies and are still an active scholar. As a writer how do you balance the roles of historian and storyteller? Are they at all in conflict?

SN: No. I have a firm rule that the stories can’t diverge from what I know of the history. But writing history is storytelling. The story is just based on documentary evidence. I think
that the best modern fiction, even fantasy, has a firm base in fact. Practically, I veer between books with footnotes and books with dialogue.

EB: Did you get any feedback from true believers in the various myths and conspiracies?

SN: Oh, yes. One person assured me that the Masons were directly descended from the Templars because he had been a member of Demolay. Others are just sure that historians are part of the conspiracy. There’s not much one can do about that. 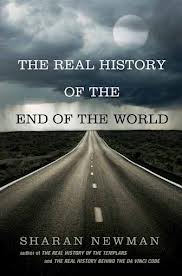 EB: Those led to The Real History of the End of the World, which among other things, reassured us that the world was not going to end last year when the Mayan calendar ran out. Does all apocalyptic thinking have something in common?

SN: I believe so. The oddest thing is that most people believe that they will survive, either physically or spiritually. We can think about the end of the world, but not our own extinction.

EB: Do all cultures have some version of this end-of-the-worldism?

SN: So far all the ones I’ve studied have something, either constant destruction and recreation or an ultimate end.

EB: What’s likely to be the next apocalyptic moment?

SN: Comets are popular right now. Global warming is too slow for most people but they do like the idea of it causing a sudden ice age. 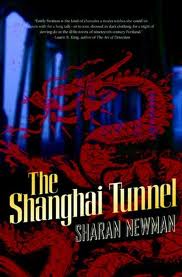 EB: I want to ask you about your 2008 mystery, The Shanghai Tunnel, featuring an Oregon widow in the 1860s dealing with her husband’s past. How did you get interested in Oregon history?

SN: I grew up in Portland. My mother was ill and I wanted to write something that wouldn’t require foreign research. There was an article in the Oregonian about a Chinese graveyard that had been forgotten and rediscovered during road building. That started me off. In researching, I discovered that I had been taught nothing in school about the real history of Oregon. I didn’t know about the political corruption, treatment of Chinese or the fact that Oregon had been admitted as a free state but didn’t allow black settlers. Also, there is so much primary material still extant. I was thrilled.

EB: Do you see any similarities between medieval France and frontier Oregon?

SN: Only those that create reasons for people to murder.

EB: What’s your current project? I hear you are working on a biography?

SN: The tentative title for the next book is Defending the City of God: A Medieval Queen, the First Crusades, and the Quest for Peace in Jerusalem, but that may change. It’s based on the life of Melisende, the half-French, half-Armenian queen of Jerusalem from 1138-1161. But it encompasses the views and experiences of the inhabitants of the Levant who don’t normally have a voice. The research is tricky, but rewarding.