The Story of Ain’t 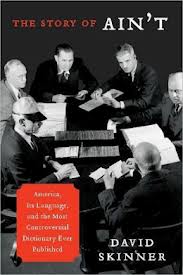 David Skinner’s The Story of Ain’t ain’t just about ain’t. It’s the tale of the making of Webster’s Third International Dictionary, the wonderfully controversial flashpoint in the cultural wars between realists and snoots. I wondered what Skinner would add to the well-known (at least by linguists) story of Philip Gove and the cultural battle over scientific lexicography and to the tale told by Herbert Morton’s The Story of Webster’s Third: Philip Gove’s Controversial Dictionary and Its Critics.

Quote a lot, it turns out. Skinner tells the stories of the dictionary and the linguistic and business issues that informed its creation—the use of the IPA, the process outlined in Gove’s Black Book of dictionary-marking, the work-day at the Merriam-Webster office in Springfield (no talking), the initial public relations blunder about ain’t (it said “ain’t gets official recognition at last,” setting Webster’s III up to be about permissiveness rather than progress). Skinner describes the attempted buy-out by the American Heritage publishing company. And he tells the stories of not just Philip Gove and Dwight Macdonald but the presidents of Merriam and American Heritage (Gordon Gallan and James Parton), and the linguists and critics of the day (Leonard Bloomfield, Charles Fries, Sterling Leonard, James Sledd, Bergen Evans, and more). H. L. Mencken and David Foster Wallace even make appearances.

Skinner treats Gove and linguists of the day fairly, explaining their thinking and hinting at the difficulty of their position: describing the realities of language in a society that often wanted rules not facts. The detail research and explorations of the lives of the principals made this a compelling intellectual drama, and a tale with a moral, but not the one you might think.

Edwin Battistella’s latest book Dangerous Crooked Scoundrels was released by Oxford University Press in March of 2020.
View all posts by Ed Battistella →
This entry was posted in Language, What People Are Reading. Bookmark the permalink.