An Interview with Alena Amato Ruggerio

Posted on December 3, 2012 by Ed Battistella 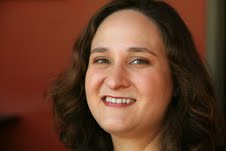 Dr. Alena Amato Ruggerio is an Associate Professor in the Department of Communication at Southern Oregon University, where she teaches rhetoric, the way humans create and share meaning through the exchange of symbols. She’s an award winning teacher whose interests lie at the intersection of rhetoric, religion, and feminism. And she is a scholar, writer and editor who has worked with the magazine Christian Feminism Today and has recently published Media Depictions of Brides, Wives, and Mothers. published by Lexington Books in September of 2012.

EB: What is Media Depictions of Brides, Wives, and Mothers about?

AR: Women are depicted in the roles of brides, wives, and mothers across all kinds of media, from television to film to news coverage to the web. Scholars from across the communication field come together in this book to analyze media artifacts such as Bridezillas, Kate Plus 8, the political rhetoric of Cindy Sheehan and Nancy Pelosi, The Devil Wears Prada, Practical Magic, Tampax ads on YouTube and Facebook, and “momtini” blogs. The companion website at www.alenaruggerio.com features images, clips, and links to accompany each chapter, and profiles each of the contributing authors.

EB: How did the idea come about?

AR: Students have to write a research paper in a course we offer at SOU, COMM 300 Research Writing Strategies. Every term without fail, some of them formulate research questions about women’s images in the media. They’re hungry for analyses that deconstruct the stereotypes, misconceptions, and pressures that are yoked on women in our relational and domestic roles. So when an acquisitions editor at Lexington Books encouraged me to submit a proposal for a book on this topic, I jumped at the opportunity. I serve as an officer in the Feminism and Women’s Studies Division of the National Communication Association, and I chaired a session at our national conference about brides, wives, and mothers. Some of the scholarship from that session formed the core of the book.

EB: What approaches are represented in the book?

AR: All the authors in the book are asking communication-based research questions (as opposed to looking at the issue from a solely political, economic, historical, religious, or sociological perspective), but there are a variety of ways to answer a communication research question. We’ve got everything from rhetorical criticism, critical/cultural media studies, Muted Group Theory, to Audience Reception Theory. Moreover, all the contributors to one degree or another start from a feminist sensibility, but again, how that manifests is different from chapter to chapter.

EB: Which of the papers was most unusual?

AR: I’m not sure I would use the word “unusual” to describe any of the chapters, but I can tell you about some of the more interesting conclusions. I was fascinated by Hinda Mandell’s study of the wives of the male politicians who admit their sexual indiscretions. You’ve seen those press conferences, where the woman stands stoically as her husband reveals humiliating details about his private life, and the camera invariably focuses on her face, perhaps waiting for her to weep or throw something at him. And then pundits speculate endlessly on whether she was right or wrong to “stand by her man.” One of the points Mandell argues is that perhaps there are private negotiations going in on those political marriages, and the wives might be less upset about their husbands’ infidelities than about the public violation of their agreements. I had never thought about that possibility before.

And then we have Diana Tucker’s chapter, in which she studies the wives of the Ohio State University football coaches. I’m from Ohio, so I understand what big local celebrities those coaches are. Tucker analyzed news coverage, the coaches’ autobiographical writings, and what the wives wrote about themselves. She discovered that they all talk about the same themes of the wives’ sacrifices for the coaches’ careers, but they all talk about it differently. When the coaches’ wives got together amongst themselves, for instance, they observed that they were treated by the news media as “lovelywives,” intentionally written as all one word to emphasize that they are expected to be attractive, lonely, unfailingly strong, and interchangeable.

If there can be such a thing as my favorite chapter, it would be Rita Rahoi-Gilchrest’s piece on “momtini blogs.” There’s an entire genre of “mommy blogs” on the web that idealize motherhood. If these blogs are to be believed, these mothers are well nigh perfect: feeding their well-behaved babies homemade, organic food, finding unmitigated joy and fulfillment in motherhood, and making crafts by hand to beautify their homes for their loving husbands. Momtini blogs represent a parody and a protest against this image of motherhood, and allow women to admit that sometimes they want to flee the expectations of motherhood, and occasionally they need to feed their toddlers Chicken McNuggets while pouring themselves a martini.

EB: You have a paper on Sarah Palin. What’s the media image of her? Is is there just one?

AR: My chapter on Sarah Palin, which is based on research I conducted with Susan Walsh, is about Palin’s complex, multiple media images. On one hand, she invokes images of pit bulls, field-dressed moose, barracudas, red meat speeches, and grizzly mamas, all of which contain the metaphor of the meat-eating carnivore. Our society usually associates eating meat with strength and power. But I argue that the carnivore metaphor has a dark side, which turns Palin’s own body into the meat to be consumed by patriarchy. That’s why there’s so much attention on her appearance, her fertility, and her sexuality. Because she’s both sides of this double-edged sword at once, the news media has never figured out how to pin her down, and she’s survived as a public celebrity long after her fifteen minutes of fame should have been up.

EB: What’s the story behind the crazy picture on the cover? 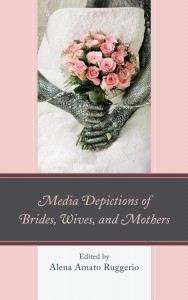 AR: I was given the privilege of selecting the image for the cover of the book, something over which few authors or editors ever have control. The publishers gave me access to a website full of stock photos and encouraged me to choose one for the cover. I got frustrated because so many of the models in the stock photos were thin, white women, so I got permission from the publisher to edit the stock to address that problem. I’m a great fan of www.deviantart.com, where both professional and amateur visual artists post their work. At Deviant Art, I found a talented digital artist from Britain named Daniel White, whom I commissioned to create an original piece for the book by replacing the bride’s skin and nails with lizard scales, spikes, and claws.

The resulting digital photomanipulation, called “With This Claw, I Thee Wed,” is an unsettling symbol for what this book is about: the bride represents idealized feminine beauty with a white wedding gown, romantic flowers, and nuptial bling, yet she is also a wild, problematic monster, which is what patriarchy really fears about women in our roles as brides, wives, and mothers. I was so enamored of Daniel’s artwork that I printed the book cover image in poster size and mailed it to England for him to autograph and send back to me. It’s hanging now in a giant frame over my fireplace.

EB: Did you find the editing process rewarding?

AR: The year I worked on editing this book was one of the most intense, creative periods of my life. I am blessed to have been mentored by Letha Dawson Scanzoni, who is an author, theologian, generator of web content at www.eewc.com, and magazine editor. I’ve served for years as her assistant at Christian Feminism Today magazine, which has given me a front-row seat to her process of both developmental and copy editing. Her inspiration has truly made me a better writer, editor, and feminist. The hardest part of producing the book was keeping the secret that I dedicated the book to her. The day she received it in the mail and saw the dedication was one I’ll remember forever.

The first lesson Letha taught me is that editing is a collaborative process. I enjoyed wonderful working relationships with Melissa Michaels of Michaels & Michaels Creative, who worked into the wee hours of every morning on proofreading, typesetting, and constructing the website; and Lenore Lautigar, Johnnie Simpson, and Lindsey Frederick at Lexington Books. Of course, it was a real pleasure to work in collaboration with the authors of the seventeen different chapters. Some of them were strangers at the beginning of the process, and some of them are friends I’ve known since I was eighteen, but I ended up feeling a professional bond with all of them by the end. I could not have done any of this without the support of Southern Oregon University. My dean, Alissa Arp, and my department chair, Jody Waters, are at the top of a long list of people on campus whose help was invaluable.

Perhaps the most rewarding moment happened just last week, when a student came to my office, and after we selected some of his courses for the following term, he paused and asked me, “Didn’t you recently write a book? Can I see it?” I pulled it down off the shelf, and he held it and said, “I want to do this some day.” It doesn’t get any better than that for a teacher like me.