An Interview with Kristy Athens 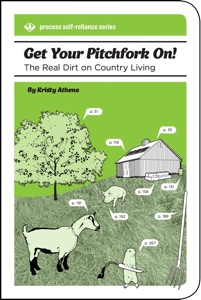 Kristy Athens is the author of Get Your Pitchfork On!: The Real Dirt on Country Living (Process Media, 2012). She has published nonfiction and short fiction in Culinate, Jackson Hole Review, High Desert Journal, and Barely South Review. She’s been a writer-in-residence for the Eastern Oregon Writer-in-Residence program and Soapstone and the editor of Columbia Gorge Magazine.

Kristy will read from Get Your Pitchfork On! on Saturday, Sept. 29 at 7 pm at Bloomsbury Books in Ashland.

EB: How did you come up with the idea for Get Your Pitchfork On!? And how did it evolve as you wrote the book?

KA: When my husband, Mike, and I moved to the Columbia River Gorge from Portland, we brought a stack of reference books, most notably Carla Emery’s Encyclopedia of Country Living. As we started digging into country life, I realized that these extremely valuable books were lacking in a few areas. First, they covered 19th-century concerns such as melting snow for bathwater but not 21st-century issues like cell phone coverage. Second, they didn’t address the social aspects of small-town life. The latter turned out to be the hardest part for me. As a feminist, childless, atheist, political progressive, trying to make it as a mainstream ruralite was extremely challenging.

The most obvious way the book evolved was that it went from present to past tense when we had to sell our land in 2009. More significantly, I think it became a better book. The book I’d have written if we hadn’t failed would have been pretty smug, I hate to say. The experiences we had were traumatizing but made me a humbler person, and they made Get Your Pitchfork On! a better book.

EB: How did you decide on the format and topics for the book? It seems to apply to rural life anywhere.

KA: I made an effort to not write a regional book. I didn’t, unfortunately, have much of a travel budget, but I interviewed people around the country and did a lot of research outside of the Pacific Northwest.

The topics presented themselves in my experiences and in my research. I was constantly jotting notes to myself. The format was a little harder. First of all, I am a short-form writer, so to trick myself into writing a book-length work, it had to be a series of short pieces. I skipped around a lot at first to keep myself going. I futzed with the table of contents for a long time before I worked out where everything should live.

EB: The title suggests that rural life is hip. Is it? It also seems like a lot of work.

KA: Hello, understatement! Rural life is endless work, in fact. I gave it a “hip” title to communicate that the book is intended for urban/suburban people who dream of moving to the country. Actual ruralites don’t really need my book, unless they just want to compare notes.

I do think that there is a revival in interest in rural life. For a while in the mid-20th century, American culture was obsessed with “new” and “modern.” My husband’s grandmother, in the old Polish “Nordeast” part of Minneapolis, used to sneak next door in the cover of night to pull out her neighbor’s corn seedlings. She just could not abide someone bringing down the neighborhood by making it look like a hick farm! Plant some geraniums, for heaven’s sake! And even now, you see news stories where people are being fined by their neighborhood associations for tearing up their grass lawns and replacing them with native plants or raised garden beds. 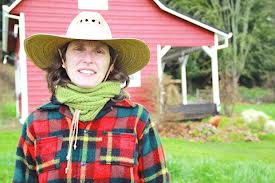 EB: So, I’m reminded of the old TV show Green Acres, where Eddie Albert and Eva Gabor were constantly surprised by differences between city life and country life? Where there any Green Acres moments for you and your husband?

KA: It’s not really a fair comparison, because we wanted to move to the country; we weren’t dragged there like Eva Gabor’s character. And we are far from being Park Avenue socialites. That said, there were all kinds of surprises! One was how wonderful your neighbors can be. Our neighbors Jim and Sue were amazing advocates, willing to teach us anything we wanted to know. Jim plowed our driveway after every snowstorm; Sue brought food when I had a surgery. They were really generous people.

I’ll never forget the frantic phone call I received from a friend who moved with her family to the Hood River area about a year after we did. “We all have ticks on us!” she panicked. “What do I do?” By then, I was an old hand at pulling ticks …

There were endless differences; that is basically the premise of the book—living in the country is a foreign experience!

EB: When did the country life get easier? When did you get your pitchfork on?

KA: We spent six years on our land. I would say it started out easier and got harder as we got more involved. We dove in with both feet.

EB: It seems that you would be both further from your neighbors and closer. What was the community like?

KA: The Mid-Columbia is an interesting place—just as it is midway between the lush, rainy west and the dry, sagebrushy east, it is also midway between liberal and conservative, and rich and poor. There were a lot of people there who were loggers and orchardists, and lots of people who had high-tech jobs from Seattle and Portland. That dichotomy played itself out at every city council meeting and public event. Plus, it’s a national scenic area so the federal government and three Native American tribal communities were involved in local politics.

Our immediate neighbors varied quite a bit—Jim and Sue were certainly the closest (in proximity as well as friendship), but we were also friends with other nearby households. I dog sat for our neighbors to the north. Others we never met. And everything in between. Luckily, no one was hostile, though we did have to confront a neighbor once for poaching firewood from our property.

EB: Who should buy your book?

KA: Anyone who dreams of moving to the country. Even if you never take the plunge, there are a lot of things that are pertinent to urban life as well.

EB: Do you have other writing projects in the works?

KA: I have a lot of ideas; too many, actually. I’m trying to decide which one to focus on. Maybe a book for rural people who move to the city!