I’ve got some academic reading to do and some linguistics puzzles to work out, but am also finally looking forward to getting to some summer reading.

I’ve got James Lee Burke’s Creole Belle on my desk and will order Chelsea Cain’s Kill you Twice, so I’ll have a dose of both moralism and grisliness, and I’ve just started Tod Davies’s Lily the Silent.

Right now, I’m finishing up Joseph Kanon’s Los Alamos, a murder mystery set inside the Manhattan Project. It’s got nice dialogue and plenty of suspense and local color, but I’m not entirely sure I like the main character or that his romantic entanglement is quite convincing. It’s piqued my interest in reading about the Manhattan Project though.

I also wanted to mention two books that I read over the spring break (!) but haven’t had time yet to comment on. John Yunker’s The Tourist Trail and Kathleen Toomey Jabs’s Black Wings. 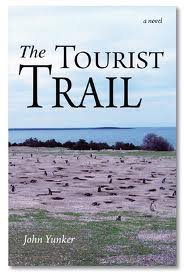 The Tourist Trail took me a while to get to, but it was my own fault. For some reason, I worried that it would be a travel book about Antarctica. But now whenever I see a penguin, I think of Diesel, the lovesick penguin who is in some ways the star of the book. Without any fanfare or tricks, Yunker writes Diesel as a real character, every bit as interesting as the humans. And he handles the environmental/eco-terrorism themes deftly, raising the key questions without getting preachy or ponderous.

It’s a cross-genre sort of book—part adventure and part love story–with some well-drawn characters, principally the tougher-than-she-seems biologist Angela and the more-introspective-than-you’d-expect FBI guy Robert, who anchor the novel emotionally, and questing nerd Ethan, who’s also on the trail of Aeneas and his band of followers.

The Tourist Trail is well-written and paced, with characters that both grow and entertain and with a story that makes you think about and marvel at our relationship with nature. And congrats to John for his 2012 IndieReaders Award.

I took too long to read Black Wings also, worrying that the sexual harassment theme would overshadow the story. It doesn’t. Black Wings turned out to be a fast-paced conspiracy-mystery where two parallel stories come together. The protagonist is Pentagon public affairs officer, Bridget Donovan, who investigates plane crash death of her former roommate Audrey Richards, the Navy’s first combat-qualified female pilot. The action alternates between their unwelcome reception at the Naval Academiy in the 1980s and Audrey’s 1993 plane crash. 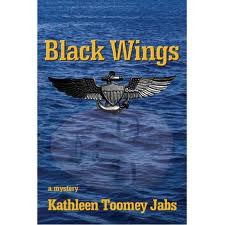 Jabs looks at Pentagon politics, honor and honor codes, friendship, betrayal, equity and blame and silence. I was especially taken with (and exhausted by) the vivid descriptions of the Naval Academy training. Jabs gets the settings just right, gets us to care about Bridget (less so about Audrey, I thought), and maintains the tension and suspense to the very last page.

I enjoyed the pace of the book and the popular flashback/flash-forward structure mostly worked (though the short chapters combined with the small number of years between flash backs and forwards sometimes had the novel banking and rolling like a fighter plane).

I’ll be watching for Kathleen Toomey Jabs’s next novel–and won’t wait so long to read it.