An Interview with Mandy Valencia 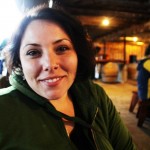 Mandy Valencia uses social media, videos, and photos to report on stories specific to the Southern Oregon area.  She covers news in the Ashland and Medford area.  She covers local musicians in her Tidings Cafe feature. She also shoots and edits the ‘Mandy on the Street” and “Mandy on the Vine” video series for the Daily Tidings website.  She also has a website highlighting her other photography and video work.

JM: You are currently working for The Medford Mail Tribune as a web/news content producer.  How does “Mandy on the Street” fit in with your job there or does it?

MV: Since joining the web team in January of last year (2011) I’ve backed off of doing “Mandy on the Street” a bit. Mostly because I’m very busy with my other responsibilities. But also because Janet Eastman joined the web team in fall of 2011 (after writing for the L.A. Times for 25 years and teaching Journalism at U of O) and has jumped right into shooting and editing videos for the web. Since I shot most of the Daily Tidings videos before her arrival, it really helps to tag-team that type of coverage. We’ve been relying on her heavily for web content.

I’ve also been putting energy into a “Mandy on the Vine” series for the Mail Tribune site, similar to “Mandy on the Street” but all about Southern Oregon wine.

JM: Can you talk about how “Mandy on the Street” got started and how the idea developed?

MV: The Tidings has a history of shooting “Man on the Street” videos for the web under the former web editor Mike Green. The results were often comical and the best of Ashland seemed to come out, often. But Mike Green really wanted someone behind the camera who could riff with people a bit and get them to open up. Being the out-spoken person that I am, Mike recruited me and “Mandy on the Street” was born.

JM: What has been the public response from “Mandy on the Street”?

MV: People seem to really love it. The videos get lots of hits on our site and views on YouTube. One of our editors, Myles Murphy, made a theme song for me that I always put in the videos. It’s actually really catchy and people see me and sing it to me sometimes. Once a biker zipped by me while I was walking home from 7-11 late one night and sung it out to me!

JM: Have you experienced any obstacles with Ashland Tidings or the Mail Tribune?

MV: The Editors at the Tidings and the Trib have always been really supportive of me. They’ve let me try new things and experiment. So my biggest obstacle is usually myself. Approaching a bunch of people on the street with a video camera can be exhausting and sometimes it’s tough to get motivated. But then I think about how awesome the video will be if I do it right and I charge forth.

JM: Has “Mandy on the Street” boosted your following on other social networks or vice versa?

MV: I think so, it’s hard to tell. Just being in a small town and working for the newspaper, you make a lot of connections and that has a lot to do with the size of my network. But I know one fan of “Mandy on the Street” is Hector Flores, the editor of Caminos, the Spanish-language magazine here in the valley. He contacted me on Facebook and told me he really enjoyed my videos and we’ve formed a nice friendship since then. Through him I’ve met a lot more really great people. So yeah I guess in some ways it has grown my network.

MV: Yep, I’m on Twitter. I’m @mandyv911. I’m also a huge fan of Instagram, I do some pinning on Pinterest. I have a www.mandyvalenciavideo.com” target=”_blank”>website I’ve been neglecting and I also spend time on Vimeo and Flickr.

JM: How do you see these social networks fitting in with your plans for the future?

MV: Spending time on social networks really helps me keep my pulse on what’s going on. Twitter is great for breaking news and so is Facebook at a local level. My friends update their statuses about all kinds of stuff that tells me what’s happening. We have plans at the Trib to start adding our twitter handles at the end of our articles soon. So my hope is that social networking will help with just better delivery of the news to the people who want to know about it.

JM: Here are links to the Ashland Daily Tidings YouTube Channel where Mandy’s webisodes for the Tidings Café and Mandy on the Street can be found.