An Interview with Bill Gholson 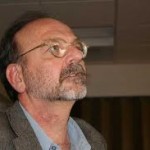 Bill Gholson is a professor in the English and Writing Program at Southern Oregon University, which he joined in 1994.  Dr. Gholson studied English as an undergraduate student at Eureka College. He received an MA in English and a PhD in Rhetoric and Composition from the University of Oregon.  Dr. Gholson has edited and published many of his own works through different presses and online journals, including book chapters, personal essays, and poems, and these range in subject from famous 20th century authors to rhetorical pedagogy.  He also gives some “heads-up!” tips on working with small publishing companies, and the meticulous and lengthy process publishing actually takes.

KM: What kinds of things have you gotten published, and if you can, be as specific as possible on details (where/who published them for you, when it got published, how long the process took, etc.)?

BG: I’ve published two book chapters on Kurt Vonnegut.  These were part of a collaboration of Vonnegut scholars who each took a part of Vonnegut’s work to write about.  I was invited to write these chapters based on my dissertation work.

I met other scholars at conferences or in other work and was invited to write.  These were published through Suny Press in New York.  They publish academic titles for the most part, although they also want the work directed a little toward non specialists.  These chapters took between a year and a year and half to go through the process.  This is not including original writing time.  The work had to be submitted and go through a peer review process which means it was read by three anonymous readers.  I then made corrections and additions based on their suggestions.  The main editor of the book also had some suggestions.  That part of the process took awhile.

I published an edited book through the University of Oregon Press.  It was called Componere and was a publication of the graduate school at U of O.  It was my first official publication.  It was a historical book about the history of composition and rhetoric instruction at the U of O in celebration of one of the founders of the program.  It took about a year of research and about three months to go through the editing and formatting process.  I was chosen to write the history while a graduate student.

KM: What do you look for in choosing a publisher?

BG: I have published a number of short works–personal essays and poems in online journals and some small presses.  These have all been submitted according to the thematic topic of the journals and whatever I had written.  I have published about five short essays and maybe 10 poems.  The time on these varies.  Sometimes it might be over a year after I have submitted something.  I think one has to have patience with small presses.

I’ve also published a few essays on pedagogy, focused on rhetorical pedagogy.  These have all gone through the peer editing and review process and have taken between a year to two years for publication.

I think it is a good idea to look for as many possible places as possible to publish.  Online publication makes it possible to have new and broader audiences.

KM: What bit of writing has given you the most satisfaction?

BG: I think what gives me the greatest satisfaction is the feeling of work that comes from putting pen to paper, the physical act of attempting to bring something out of nothing.  I like the routine and I like the feeling that I have really thought about something if I have made a genuine attempt at it.

KM: What advice would you give to students today who want to become professional writers?

BG: I would advise writers to live the life of a writer.  By that, I mean that if students want to be professional writers, they need to understand that it is tough work.  If one wants to write a work of fiction or poetry it requires discipline, the ability to put other things aside while writing.  Endurance.  Fortitude.  I would say go for it.  Give yourself an amount of time to accomplish what you want and then stick to it.  Writing is one of those things that requires lots of dedication and the willingness to live in solitude a great deal of your life.

KM: If you could write about anything at all, what would be it?

BG: What a question.  Of course, I would want to write the great American novel.  My real answer is that I would either like to give up or finish a book I have working on about teaching.  It is tentatively titled Vertigo I can never seem to get it to a place that is satisfactory to me.