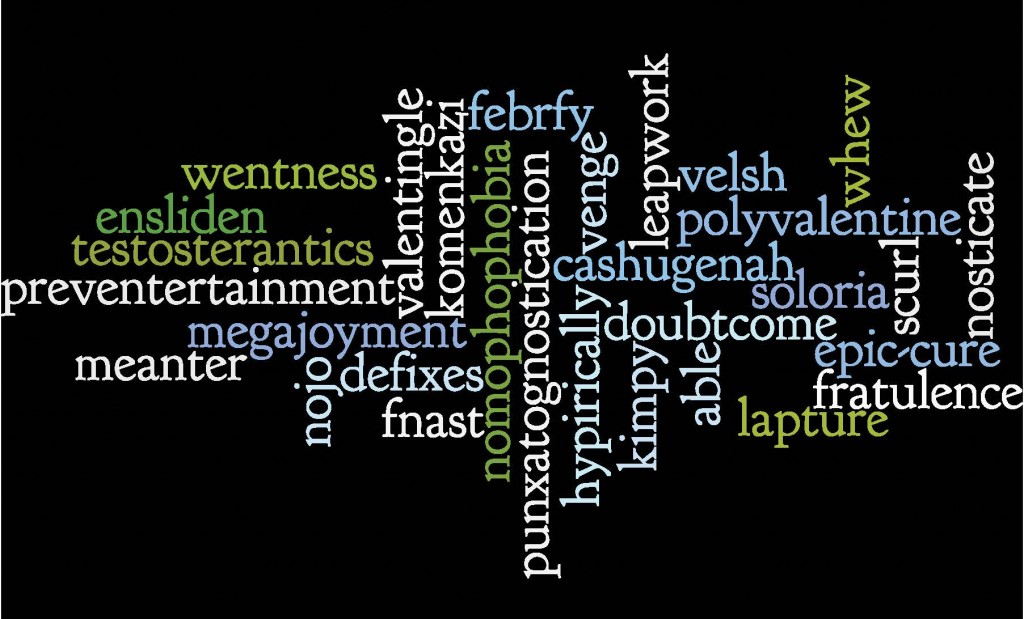 Here are the non-words for February.

epic-cure, n. behavior modification for those who overuse the adjective “epic”. 3 Feb

komenkazi, adj. crash-and-burn attack by one non-profit on another. 4 Feb

nosticate v. to assess your recovery from a cold by the color of your mucous. 5 Feb

nojo, n. the loss of one’s mojo or the lack of mojo altogether. 6 Feb

meanter, v. (ME-ant-er) to unintentionally use a word with a novel meaning, in other words, to malaprop. 7 Feb

kimpy, adj. even skimpier than skimpy, used of portions or apparel. 8 Feb

scurl, v. to make a vulgar remark about someone to damage their reputation (backformed from scurrilous). 9 Feb

wentness, n. condition of being present and then leaving at a break or intermission (“My wentness was unnoticed”). 10 Feb

cashugenah, n. (ka-SHUG-a-na) euphemism for buttocks, as in “a pain in the cashugena” (suggested by Mary Maher). 12 Feb

valentingle, n. the pleasure you get from receiving a Valentine’s Day card or greeting. 14 Feb

venge, v. to avenge or get revenge (an ambiguous clipping), especially in a sporting contest. 18 Feb

hypirically, adv. a claim that assumes that the evidence of its validity exists (from hypothetical + empirical). 21 Feb

ensliden, v. to mention or cite a colleague on a PowerPoint slide. 23 Feb

lapture, n. the pleasant feeling you sometimes get in your groin driving over rumble bars or a sudden dip in the road. Feb 27

nomophophobia, n. (NO muh fuh FO bi uh) fear of being without a cell phone or cell phone signal. Feb 28

leapwork, n. the extra unpaid work you do when February 29 comes on a weekday (suggested by Brian Stonelake). Feb 29

Thanks to Rick Hardt, Charlotte Hadella, Lucia Hadella, Mary Maher, Leroy Fulwiler, and Brian Stonelake. Charlotte’s testosterantics came about when she found a word to match the definition suggested by the Phoenix High School writing group. I was glad for Leroy Fulwiler’s fratulence. I had been toying with fartulence for a while but couldn’t think of an interesting definition other than “malapropism of flatulence,” but I’m not sure about using malapropisms as definitions. Polyvalentine was my fallback when I learned that ambivalentine had already by used as the title of a poem. I was hoping to play a bit more with valence and valentine, but the results seemed too heavy handed. But I was happy to introduce a word with a bang (!) as a letter and was pleasantly surprised to learn that venge was not yet a word since allows for a non-word with an ambiguous etymology. Got a favorite non-word? Let me know.

Edwin Battistella’s latest book Dangerous Crooked Scoundrels was released by Oxford University Press in March of 2020.
View all posts by Ed Battistella →
This entry was posted in Non-word of the Day. Bookmark the permalink.