January’s Non-words of the Day 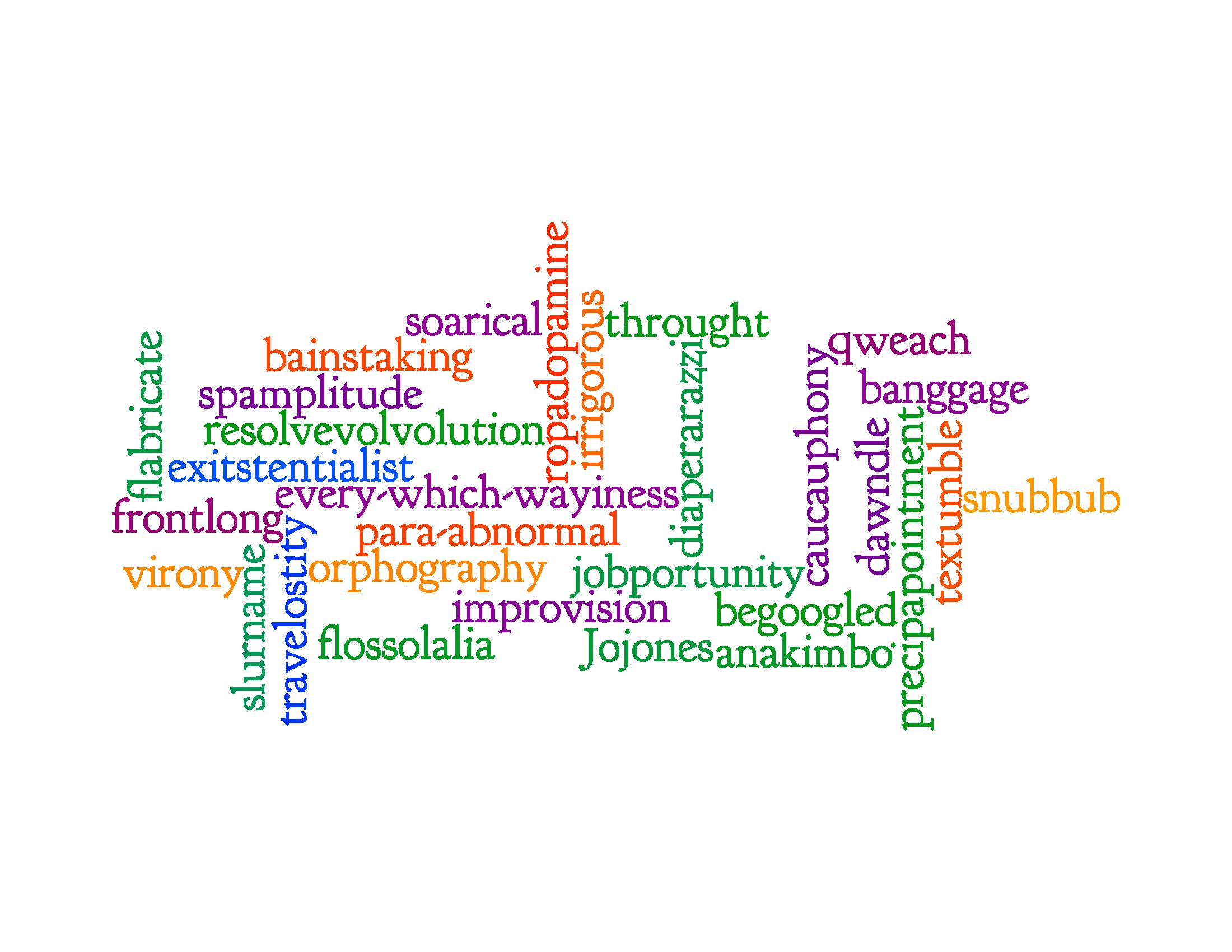 First, some words that I wished I could have used. I wanted to used haberdash as a verb meaning “to run after a hat that has blown off your head.” But haberdash is already a verb (to deal in small things, hence haberdasher) and the Urban Dictionary lists it as meaning to jump into someone else’s photograph. I’m not quite ready to just redefine existing words. Too bad. Haberdash should mean chasing your hat.

And I wanted to use ginormal to mean something that is now normally larger than it used to be—supersized. But ginormal is in the Urban Dictionary as “Ginormously normal. 2: Something that is extremely average. 3: Something that is far from being out of ordinary.” Again, I like my definition better. The Urban Dictionary’s are, well, extremely average and far from being out of ordinary. But so far I haven’t come up with another word that fits the definition I had in mind. So feel free to use ginormal my way.

I toyed with using pubbub to mean “bar fight” but pubbub seemed to be in use already in other ways, so I switched it up to snubbub.

Some acknowledgements—textumble came from a conversation with geology professor Charles Lane about a year ago and has been rattling around in my head ever since (and it presented an interesting spelling challenge—textumble, texttumble, or textstumble, with a silent s). Improvision is based on a suggestion by my colleague Margaret Perrow. Every-which-wayiness is a compound that I overheard in a talk by linguist Lucy Thomason, who used it to refer to hair. I liked the idea of extending that to tangled arguments as well.

Thanks again to Rick Bleiweiss, Leroy Fulwiler and Lucia Hadella for their suggestions: travelostity, spamplitude and jobportunity. I wanted to use Mary Maher’s suggested neuterize, a synonym for neuter (with the wonderfully ironic redundant suffix), but the Urban Dictionary already had neuterize listed with the not-bad meaning of “To make men and women, and society, devoid of gender tendencies or characteristics in the attempt to eliminate feminity [sic.] and masculinity.” Hmm, feminity … a found non-word.

resolvevolvolution n. A new year’s resolution made many times before (from resolve +(re)volve+(resol)ution). 1 Jan

exitstentialist n. paranoid fatalist who insists on being seated facing the door in restaurants. 2 Jan

anakimbo adj. any human body position in which the hands are not on the hips with elbows pointed outward. 3 Jan

caucauphony n. quadrennial noise from the Iowa caucuses, not to be confused with cawcawphony, a symphony of crows. 4 Jan

frontlong adj. directed straight ahead, as in a frontlong glance. 5 Jan

orphography, n. – font styles that no one can read (eg, Kunstler Script). 8 Jan

whych – interrogative pronoun (pronounced WHY-CH), which and why, as in “Whych do you prefer?” 9 Jan

qweach, n. a speech disguised as a question, esp. one asked after an academic talk (also spelled queech, queach). 10 Jan

textumble, v. or n. to fall up or down steps while texting, or the fall itself. 11 Jan

dawndle, v. not getting out of bed when the alarm goes off (from dawn + dawdle). 12 Jan

slurname, n. a surname which is homophonous with an ethnic, racial, sexual or other slur. 13 Jan

virony, (pronounced VI-rony or VIR-ony), n. veiled irony expressed by females about or toward males. 17 Jan

ropadopamine, n. neurotransmitter which produces a calmness that allows one to outlast one’s adversaries. 18 Jan

precipapointment, n. the unfulfilled expectation of a snow day. 19 Jan

every-which-wayiness, n. randomly tangled and protruding, used of both hair and argumentation. 21 Jan

improvision, n. the act of providing by improvising (or scrounging). 24 Jan

soarical, adj. lyrical, lofty or aspirational but not to an icarian degree. 25 Jan

flossolalia, n. unintelligible speech that occurs when you talk to someone while flossing your teeth. 27 Jan

jobportunity, n. the opportunity to have a job [the p is silent] (suggested by Lucia Hadella). 30 Jan

spamplitude, n. the ratio of spam to useful mail in your inbox (suggested by Leroy Fulwiler). 31 Jan

Got a favorite? Or a suggestion? Post a comment. Or email me at edbattistella followed by usual gmail stuff.

Edwin Battistella’s latest book Dangerous Crooked Scoundrels was released by Oxford University Press in March of 2020.
View all posts by Ed Battistella →
This entry was posted in Language, Non-word of the Day. Bookmark the permalink.