An Interview with Amy Richard and Kit Leary 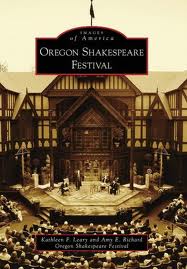 This week Literary Ashland features Amy Richard and Kathleen (Kit) Leary, authors of the photographic history Oregon Shakespeare Festival, part of the Images of America series by Arcadia Press. Published in 2009, Oregon Shakespeare Festival, chronicles the story of Ashland’s renowned theatre company beginning with that first Chautauqua in the 1890s. The 200 images, from the OSF’s archival collection, the Southern Oregon Historical Society and the Terry Skibby collection, document the growth, change and challenges of the Festival. You’ll see people too—from historical figures like William Jennings Bryan, Duke Ellington and Ginger Rogers—to others that you may run into around town.

EB: How did you come to write your book, Oregon Shakespeare Festival?

AR: Arcadia Publishing contacted OSF about writers who might author a book about Ashland. I believe they asked if Kit might want to, but she deferred and offered some suggestions for local writers with deep knowledge of the city. A few weeks later we received another call from Arcadia asking if someone at OSF would like to write a book about the organization. Since we were about to celebrate our 75th anniversary it seemed a propitious time to have a book for our audiences. After discussions with various folks here at OSF, Kit and I decided to co-author the book. The anniversary committee had been talking about creating a video or a book, but it’s an expensive endeavor, and Arcadia made it more affordable as it took on the publishing costs, and OSF would pay photographer fees and Actors Equity Association fees. OSF gets a small royalty on each sale. We haven’t covered the costs yet, but maybe some day!

KL: It’s my recollection that Arcadia hadn’t yet cracked the Southern Oregon area with their books so they contacted OSF and maybe other groups. Our Arcadia contact had grown up in Oregon and was familiar with OSF and Ashland. Originally the thought was for it to be a combined book about Ashland and OSF together in one book. I felt that others knew more about Ashland than I did and that it would take quite a lot of work to research for me, outside of my regular job. I mentioned several other names of people who I knew were authors of articles or books about local history and might like the work. One of them said they knew about Ashland, but that I should write the book about OSF. I mentioned this to Amy, and word got back to Arcadia too.

In the meantime, I knew that the Tudor Guild had been hungering for some sort of history book on OSF to sell in the Tudor Guild since The Golden Fire by Ed and Mary Brubaker had come out around 1985 for the 50th Anniversary Season. Amy and I had also earlier worked together on a feature article about OSF history in the Souvenir Program for the 60th, I think, and then it was published as a separate piece around the 2000 or 2001 season. It seemed logical for the two of us to take it on when Arcadia approached us about doing a book devoted exclusively to OSF.

EB: What’s the process of telling a story through photos? Do you have an overarching theme in mind and look for ways to illustrate that or did the photos suggest the themes?

AR: I would say knowledge of the image collection informed the narrative line, but the narrative ultimately guided the choice of photos. We started by creating an outline of the various major events over the years and then distilled it down to sections which then became chapters. Of course, one has to work within the Arcadia template that dictates number of photos, words, etc., so we had to keep that in mind as we decided how to lay out the sections. I think we had six or seven chapters to begin with and then eventually honed it down to five.

For example, because the OSF archives have some great images of the Chautauqua years (as does local historian Terry Skibby) that preceded the founding of OSF, as well as the archives’ early photos of Angus Bowmer before he arrived in Ashland, we definitely wanted to get those images in the book. So the first chapter was an attempt to tell the story, through text and images, how accident, fate and coincidence can bring the right man to the right town at an opportune time.

KL: All Arcadia books are primarily photos, with lengthy captions, so we knew they had to be dynamic pictures to draw people in and interesting comments or connections that would drive it forward. We really wanted to tell the story of how this major regional theatre started in this small town during the Depression with Angus Bowmer’s vision, and how it grew to what it is today. It didn’t just happen. We also wanted to tell what Angus had done in his life that led him to Ashland and to collaborate with the community to start the whole thing going. There was a foundation laid by earlier cultural activities in the Valley, including the three Chautauqua theatres on the site of the Elizabethan Stage. We also wanted to take it roughly in chronological order to show that one thing led to another.

I knew there were wonderful pictures or events that I wanted to get into the book which I had learned about from previous reference requests or dealing with researchers for so many years. Amy knew some of these, but not all. Additionally, we wanted to cover the whole of OSF, not just the actors and the plays on stage. It really takes people working in collaboration for the “Ashland Experience” to come about.

EB: How did you decide which photos to use?

AR: That was tough. There were so many choices. We wanted to show the changes that had occurred, highlight people and events that were critical to OSF’s success, show the breadth and depth of the work that occurs here, and share images from productions that company members and audiences have held dear. The book lends itself to horizontal images, but as I laid out the pages and wrote, I wanted to provide visual variety. And of course, some images are just better than others.

KL: Sometimes, there might have been only one picture I could find of some event, and we went with that, and I searched and searched for some pictures. We did leave some things out because I couldn’t find a picture. Usually there were a whole lot, and I gave Amy about five choices and she chose one. At some point we had too many pictures for one chapter and not enough for others, so we balanced it out a little.

EB: What was your collaboration like? Were you each involved in everything or did you divide up the tasks?

AR: In a nutshell, Kit was the researcher and I was the writer. We felt it would be difficult to hold on to the narrative line if we both wrote and that we needed one voice throughout the book. So Kit pulled a ton of images and I sorted through them and wrote, and sometimes I’d ask if there was a specific image to illustrate an event, and she’d find it or tell me no. Often I’d find I didn’t have enough information about an image I wanted to use, and she would delve into the archives to find what was needed. The collaboration worked well.

KL: Amy’s right that she was largely the writer, though she would ask me for a few more words for some caption and I’d help her out there. I found most of the pictures, but she would ask for specific ones sometimes, too. I did fact-checking and proofreading on what she wrote. In the outlining stage at the start, I also added some events for chapters since I knew when something started like Park Talks or Backstage Tours. As I said, we were doing it in chronological order, so we wanted to get the dates right.

EB: Your book draws on a great tradition of OSF documentation and archiving. Can you tell us a little about that? What was the scope of the material that you had to choose from?

AR: I think Kit can address that question more accurately, but there was a massive amount of material. I found I used the yearly souvenir programs a great deal. The information and images in those programs was invaluable to fleshing out the narrative and in pointing us toward some great images.

KL: The Archives has not only photographic images, but audio and video recordings, scripts and production books, reviews and feature stories about the artistic side of the operation, but also board minutes, press releases, oral histories, publications, marketing materials, financial and construction records on the administrative side. We drew on all of it.

EB: What did you learn in writing the book?

AR: I was blown away by the dedication, collaboration and hard work that went on through the 75 years of this organization. Not only by company members, but by the community…and not just Ashland. OSF had close relationships with Medford and Rogue Valley individuals, organizations and companies. OSF was built by the Rogue Valley community and it seems the entire valley felt ownership and pride in OSF. Unfortunately, that seems to have greatly diminished in the last three to four decades.

KL: I learned about many things in more detail than I knew from just working on a particular request that I had perhaps five years before, but hadn’t the luxury to go back and delve into. Also, as I was researching one thing, I would stumble on something else that was crucial. It was all about laying the foundation. I also became more and more indebted that Angus Bowmer and Bill Patton were packrats. After the book came out, it was also great to see people look at a picture and show true excitement over that relative of theirs or that fond memory of a production they had seen. Amy also interviewed people who were in the pictures and they told funny stories or recalled something that happened at the time of the picture. Amy was able to bring gems to the caption writing.

EB: Are there any plans for a sequel or other works drawing on OSF archives?

AR: Not at this point! Maybe for the 100th anniversary!

KL: I defer to Amy on this.

EB: It was really interesting to me to see photos of current company members when they were younger—I almost felt like I was looking at their personal albums. What’s been the response from the OSF company members and from patrons?

AR: I don’t have exact sales numbers at my fingertips, but what I hear from the Tudor Guild is that the response has been very positive.

KL: Showing pictures of current company members in their younger days also shows off the dedication and longevity and versatility of these theatre artists. Longevity and the repertory are two esteemed values at OSF.

My impression is that the response has been very good. Arcadia is pleased too, since apparently this book has had more printings than some others they have published. The book also won an award from the City of Ashland and was nominated for a national award from the Theatre Library Association. The Tudor Guild loves having it in the shop and it is available at many other venues as well, including the drug store and the hardware store. We are happy to have that interest from the community.

EB: Thanks for the interview.