Posted on December 18, 2011 by Maureen Flanagan 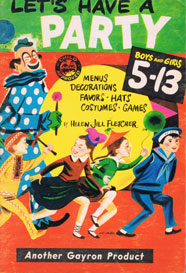 I have a bad habit of haunting the thrifts and local booksales and like many, I’m always on the look out for odd items. Recently, Let’s Have a Party by Helen Jill Fletcher (Paxton-Slade, NY, 1961) caught my attention. It’s a small brightly covered pamphlet, just 64 pages of coarsely fibered yellowing paper with red, blue or green line drawings to illustrate each chapter. Designed for boys and girls age 5-13, it’s everything a 1961-era child (and parent) could want to throw the perfect party for any occasion or holiday. 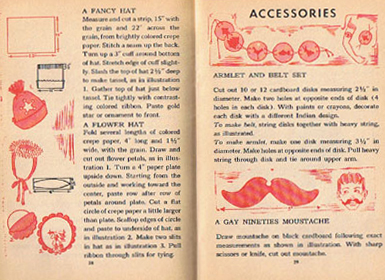 Many of the articles start with similar instructions and call for similar materials. Cowboy Spurs for example, “Cut two strips of flexible cardboard” and To Make Headband: “Cut out headband strip from construction paper”.  The Noisemakers chapter has instructions for a Nail Jingler (made by threading string through a handle and tying to nails), Bottle Top Jingler (flatten bottle caps and thread with string), Pie Pan Tambourine (tie bottle caps to string and to pie pan edge). No Pirate Party would be complete without a pipe cleaner skeleton with a marshmallow head, climbing over marshmallow graves and tombstones, marked with the names of guests. Marshmallows also feature in the Snowman Centerpiece: “Cover a grapefruit head and a large round melon body with white crepe paper…cover entire snowman with marshmallows…” and in Party Foods: “Make candy train of marshmallows joined together with pieces of toothpicks

This little pamphlet, faintly musty, is a time capsule of sorts. Chuck E Cheeze wasn’t mentioned, or any brand names. It was a time when electronics hadn’t yet been minaturized and sissors and paste dominated. Kids ate marshmallows rather than sushi or gummi bears. A time when people had paper, not plastic and more time than money.

I imagine moms working late – erm – rather, before the kids got home from school, making Pennant Borders (“Cut pennant shapes from white or colored construction paper”) and Cardboard Lanterns (“Cut cardboard to size and fasten edges together with paste”). I wonder that kids age 5-13 found joy in these simple objects: to have a party at home, with favors and treats made by hand of everyday goods, indulging for example in a wild west fantasy thanks to a Gay Nineties Moustache (“drawn on black cardboard following exact measurements as shown in illustration”) and dance to a radio tune adorned with a Soda Straw Necklace (made of “white or colored cardboard disks, measuring 1″ in in diameter”, these alternating with soda-straw sections strung on heavy thread).

This Christmas, the bestselling children’s gift is the Leapfrog, a child’s version of the iPad. Try to make one of those out of crepe paper or marshmallow!