Eavan Boland to Read in Ashland 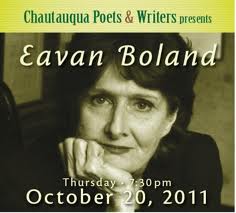 Irish poet Eavan Boland will read her work at the Mountain Avenue Theater (that’s at Ashland High School) on October 20th at 7:30 pm.

Boland is a Stanford University professor and the author of collections titled Domestic Violence, Against Love Poems, The Lost Land, Night Feed, and In Her Own Image, among others. She’s also written an autobiography titled Object Lessons: The Life of the Woman and the Poet in Our Time and a collection of essays called After Every War.

I’m just getting to know her work, but here’s a link to a nice interview on Caffeine Destiny, the online magazine produced by Portland writer by Susan Denning. And her first name, she says, is “pronounced as if it was two names, Eve and Ann–so it sounds like Eve-Ann when it’s said quickly.”

Edwin Battistella’s latest book Dangerous Crooked Scoundrels was released by Oxford University Press in March of 2020.
View all posts by Ed Battistella →
This entry was posted in Literary Events in Southern Oregon. Bookmark the permalink.