An Interview with Colby Elliott of Last Word Audio 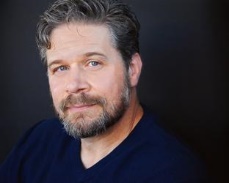 COLBY ELLIOTT is an award-winning audiobook narrator and the talent behind ​​LAST WORD AUDIO. Originally from central Nebraska, he has a Master’s degree from The University of Denver and taught theatre before becoming a narrator. He was a finalist for a 2017 Audie Award for his narration of Coffee at Luke’s: An Unauthorized Gilmore Girls Gabfest and won an Earphones Award for Bill Fitzhugh’s Fender Benders.

Ed Battistella: Tod Davies introduced me to your work on Snotty Saves the Day and I’ve become a fan. I’m looking forward to the whole History of Arcadia series. How did you get into the audiobook business?

Colby Elliott: I fell in love with audiobooks at a young age, listening to cassettes like Tales of Poe narrated by Vincent Price and Basil Rathbone on my Sony Walkman while walking to school in North Platte, Nebraska. Spooky stories made for a brisk walking pace.

As far as making audiobooks, I’d been a technical theatre teacher for a number of years and because I’d worked with microphones and digital audio workstations, I just kind of figured out that I could do it. So, I recorded an audiobook in my spare time, sent it to the authors and after they okay’d it, sent it directly to Audible. One became two, which then became nearly 40 now.

EB: I noticed that you do a variety of dialects and accents. In a book with lots of voices, how do you keep from getting lost?

CE: I always try to create a “Character Bible” for each project. Every character entry will have information like musical voice range (Tenor I through Bass II), placement within the mouth and throat, descriptors of different regions and accents or even occasionally actors whom I might keep front-of-mind while performing.

It can get confusing. It’s funny how there always seems to be “that one character” who makes a brief appearance in Chapter 2 and then mysteriously reappears in Chapter 42. At those times the Character Bible is vital!

EB: I notice a lot of popular culture in Last Word’s releases: Mike Madrid’s The Supergirls, Tim Hanley’s Wonder Woman Unbound, The Psychology of Joss Whedon, and more. Does Last Word Audio have a specialty?

CE: We definitely concentrate on projects that are interesting to the geek lit and nerd lit worlds. Comic books, role-playing games, and pop culture are definitely things that are fun and rewarding to produce.

But looking at Last Word’s longer scope, many books tend to happen in distinct artistic clusters. There was a definite Comic Book Period, a more general Pop Culture Period, and most recently a Table-top Roleplaying Period. And in between are authors and publishers that I love to read and want to support their message. Tod Davies of Exterminating Angel Press and television producer and writer Javier Grillo-Marxuach both spring to mind. They have wonderful messages within their art and it’s a joy to narrate. 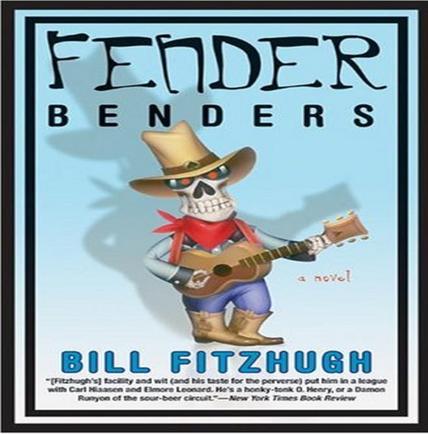 EB: How do you choose products for Last Word Audio?

CE: Every book I’ve chosen for Last Word Audio does have a point to it. Sometimes it’s as straightforward as “Bill Fitzhugh writes wonderful characters that I relish playing,” but it can also be as complex as, “I want to tell the history of the tabletop roleplaying industry because playing those games made want to become a narrator.”

I can usually tell if a book is one I want to do. If, while I’m reading, I think, “Why doesn’t everyone know about THIS? They SHOULD!” I know I have an audiobook I want to produce.

I’m also keen to find authors in the places I live and support them, especially if it’s a genre I haven’t yet recorded. Scott Lininger’s Guesswork was my first YA title when I lived in Colorado, My Peculiar Family was my first horror book, and Matt Herring’s Monkey See, Sea Monkey was my first Middle Grades fiction, the latter two done when I lived in New England.

EB: What’s the toughest thing about recording and producing audiobooks? I tried out once and could barely make it through a paragraph without a flub.

CE: It requires an awful lot from the actor for sure. Being “in the moment” for hour-long recording sessions can be grueling…and exciting. When you’re in the middle of a scene and the characters are saying things that bring you to tears or laughter, it’s just amazing.

And as far as flubs go, they are part-and-parcel of the performance. If you aren’t making errors from time to time in the studio, you aren’t committing to the emotional truth of the characters. In the moment, a “the” can become an “a,” which happens a lot, but weirder mistakes can happen, too. A narrator might see one word and say another. Then it’s the actor’s responsibility to “punch back in” to the recording mix and correct the error while also trying to achieve the same tone and energy. It can be a challenge!

EB: What makes a great audiobook? The writing? The narration?

CE: A beautiful alchemy between the two is where the art happens. I’ve listened to very average prose elevated by a wonderful narrator and I’ve heard wonderful writing absolutely throttled by a bad performance. For me, a great audiobook is one where I make discoveries at every level of the project’s narration. I’m initially inspired by the pre-reading, the performance itself reveals the characters inner lives, and finally, in the editing I discover ways to mold the performance, giving each scene poignancy.

EB: You’ve got sample of audiobooks on your website. What should folks try first?

CE: I always recommend Bill Fitzhugh’s Fender Benders for its characters and story. It’s a cool whodunit with moments made memorable by musical elements.

For those who love fantasy I think Snotty Saves the Day is an absolutely perfect place to start in the way it melds folktales, legends, and myth. A fortunate consequence of producing things in “periods” is that once a listener finds a title they like, there are usually a few others ready to be put in their listening queue.

EB: When I lived in Nebraska, I fell in love with Darren McGavin’s reading of the Travis McGee books. Who are some of your favorite narrators?

CE: Some of the classic British narrators really resonate with me. Patrick Tull who narrated the Aubrey/ Maturin series by Patrick O’Brian, Frederick Davidson/David Case (the same narrator and pseudonym) narrating the Harry Flashman series. More recently, Kobna Holdbrook-Smith reading the Rivers of London series by Ben Aaronovich are among my favorite listens and relistens. I love American narrators Susan Bennett, Barbara Rosenblatt and Tavia Gilbert on the female side, and Bronson Pinchot and the late, great Bill Dufris are always a joy for male voices.

Honestly, so many of my colleagues have narrative techniques that I love and want to emulate. I like Dion Graham’s silky smoothness and Julia Whelan’s deftness with romantic scenes, especially when reading her own work (not easy). 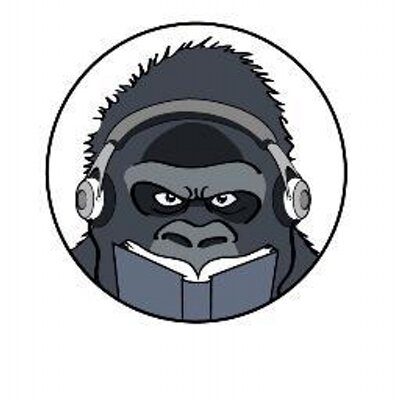 EB: I notice that LAST WORD AUDIO’s logo is a gorilla wearing earphones. Can you clue us in on that?

CE: When I first started Last Word Audio, I was concentrating on finding back-list titles, a bit like a literary archeologist, and I thought my audiobook recordings would be “The Last Word” on any book.

The gorilla in the headphones came about when I was talking to an artist-friend about logos, we wanted it to be formidable…but vaguely cuddly and cartoonish. Big and imposing but…relaxed.

It’s the 800-pound gorilla who is, in reality, a laidback dude who hangs out in the mists on the mountainside reading his books.

And I’m told if one squints a bit…it looks a little like me.

CE: My pleasure and thank you for listening!