Of THE I sing 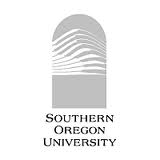 It’s National Poetry Month, so I want to highlight some found verbal art. Southern Oregon University has a new logo and vision. We’ve got the big concentric U. The u-in-a-U replaces the old moving mountains—or tombstone—logo. The new logo says University more loudly. And, of course, it says “so you,” in text-message format: so u.

The best part is our new tag line: THE public liberal arts university of the West. I like that. Especially the THE part, pronounced with the long vowel. Many of us say “thuh” before a consonant and “thee” before a vowel: thuh professor, thuh student, but thee answer, thee Oregonian. Check it out. You especially hear it when actors act, or better yet, when singers sing.

We put this long-short vowel distinction to use in another way also: when we use the “thee” pronunciation before a consonant, or hold it for an extra beat before a vowel, it creates emphasis—a sense of unsurpassability: THE play to see, THE book to read. What we say with the long vowel is the one and only, the ne plus ultra.

THE is not the only interesting word in our new tag line. The phrase “public liberal arts university” is intriguing. I find myself wondering if “public” and “liberal arts” are equal modifiers of “university” or whether we might be talking about “public liberal arts.” That would be a different, and in some ways, more interesting thing: a liberal arts engaged with public issues as opposed to one merely accessible to the public. Either is good, but they are different. (And remember, “liberal” here means “freeing” not “leftist“ and “arts” is broader than just fine arts.)

“Of the West” is interesting too. In saying “of the West,” do we mean location, culture or relevance? Are we in the West (West Coast, west of the Rockies, west of the Mississippi)? Are we about the West? Are we for the West?

The public liberal arts university of the West is verbless. That invites readers to supply their own verb: an “is” or a “will be.” It’s smart for an aspirational tag line to be verbless. We can be even as we are becoming. And once we are it will seem that we have always been.

Edwin Battistella’s latest book Dangerous Crooked Scoundrels was released by Oxford University Press in March of 2020.
View all posts by Ed Battistella →
This entry was posted in Language. Bookmark the permalink.