An Interview with Lance Olsen, author of Dreamlives of Debris 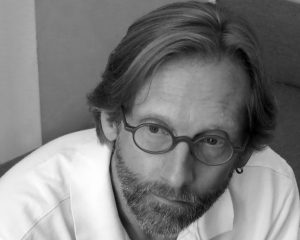 He is a Guggenheim and an N.E.A. fellowship recipient and teaches at the University of Utah.

We recently talked about his forthcoming book Dreamlives of Debris.

EB: Dreamlives of Debris seems to me to be in part a book about bodies. What prompted you to write this particular retelling of the story of Theseus and the Minotaur?

LO: The central point of view in Dreamlives of Debris lies with the Minotaur. We’re not talking about a monster with a bull’s head and human’s body here, though, but rather a little deformed girl whose parents hide her away at birth from public view in the labyrinth below Knossos.

She calls herself Debris, and possesses the ability to hear/see/feel the thoughts, memories, desires, pasts and futures of others throughout history, from Herodotus to Silk route traders to Borges, Derrida, and Edward Snowden. In fact, she can’t stop herself from channeling those voices. That’s the problem.

Her body, then, becomes a kind of living instrument through which time and others travel. That may sound like a science-fiction trope. But her state is also a metaphor for our Heraclitean bodies, how they are portals through which we are in good part constructed by temporality and the voices of strangers.

I’m also deeply interested in our culture’s notions of monstrosity: What does such an idea mean, and what does it reveal about what our society must repress to remain whole?

EB: It seems to me that there is a special value to retelling myths in that it both challenges the myths themselves and challenges contemporary mythologies. Is that part of what you had in mind here?

LO: Absolutely. Rewriting is a form of re-righting, bringing essential narratives into a contemporary key, because through retellings we un-tell, compose our present rather than perpetuating someone else’s past, interrogate the assumptions behind received narratives, recast them so they continue to mean for us.

By doing so, we remind ourselves that there are always other ways to narrativize our lives, which is to say other ways to live them, than the ones we’ve been taught.

EB: In Dreamlives of Debris you seem to be defying the reader to keep up, and the text sent me to Wikipedia more than once. How should readers approach the book?

LO: When I begin composing a work, I often ask myself what its central metaphor is, then follow that down through overall structure all the way to word choice. Here that metaphor is the labyrinth.

I laid out Dreamlives myself in InDesign, as interested in building a novel as in writing one. Every page is a perfect square loud with white space. Each represents a different room in Debris’ labyrinth. And each arrives without a page number, so it’s easy to become disoriented, lost, as a reader, just as Debris and her victims become disoriented, lost at the level of narrative.

Because the novel arrives with no conventional location markers, the reader may feel a bit freer to jump around, begin to think of reading as a mode of choreography, a way of being in the world, taking various paths as the mood strikes, for as long as the mood strikes, and then perhaps wandering off in a different direction.

Another way of saying this: Dreamlives is, I hope, both an estrangement of the reading process and an invitation to read widely, freely, wildly, thinking of the novel as one part of a larger textual constellation (including, say, Wikipedia, other tellings of the Minotaur myth, a dictionary), whose dots one can join in a multitude of ways.

EB: Can you tell us a little about how you balance the experimentation and the quest for revelation — or truth — in your work?

LO: I’m a subscriber to Roland Barthes’ observation: “Literature is the question minus the answer.” So the kind of writing that excites me most isn’t that which presents a truth (I might call that propaganda) so much as that which presents a problematics, both at the stratum of form and theme, meant to challenge us to see and feel and think in unusual, complex, and — all going well — illuminating ways.

Truth suggests a telos, an end, a point of arrival, a product. I guess I’m more interested in the journey through the unending labyrinth. 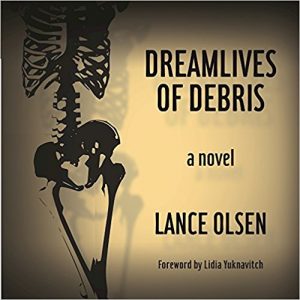 EB: In Dreamlives of Debris you comment on grammar and language quite a bit, saying for example that “grammar is by nature a category of error,” that “people put too much faith in grammar” and that “language is a proliferation of distance,” and at one point referring to a chamber that “stank language. Vowels, mostly.” How do you feel about grammar and language?

LO: We started off talking about Dreamlives as an investigation of bodies, of embodiment, which is definitely the case, yet in my mind the novel is equally an investigation into the problem of language —a problem that has dogged theory for the last hundred years plus. The more philosophers and writers have tried to tackle that idea, whether Nietzsche, Wittgenstein, or Derrida, the more language has come to seem slippery and gorgeous and a system that is both profoundly flawed and beyond which we cannot think.

The question only gets more fascinatingly complicated when we ask precisely what the relationship between language and the body is. These days theory tends to privilege the latter, but of course we can’t think the body without language, nor can we think language without the body.

Debris understands this at a cellular level.

EB: I was struck by the name Debris, so I did a little googling and found that there are people named Debris. What do you make of that?

LO: I had no idea! I’m without words.

EB: Your work is known for rebelling or resisting the concept of genre. What do you think of genre?

LO: Genres are a series of reading codes we’ve been taught to recognize. They allow us to have relatively predictable, comfortable relationships with texts. But those that I respond to most are the ones that destabilize our reading experience in various ways, including by fusing and confusing genres, or trying to work outside them altogether.

Experimental narrative isn’t just another genre like, say, detective fiction or romance, in other words. Rather, I think of it as a possibility space that invites us to move beyond categorical thinking.

EB: You’ve been a writer for some time now. How has your notion of innovation evolved?

LO: I guess a good way to put it is this: none of us are the same readers at forty we were at fourteen, or at sixty we were at six. So what constitutes the concept of innovation will change for each of us over time, depending on what we’ve read, how we’ve lived, how we’ve changed (I wouldn’t quite say “evolved,” which might connote progress for some), how we’ve been educated, even where we’ve inhabited. So one person’s mind-bending experimentation may be another’s ho-hum status quo.

I suppose, given my own set of circumstances, my tolerance for what some might call extreme texts has gone up.

I’ve grown immune, perhaps, to many species of the infection.

EB: How does your approach to writing affect you as a reader? What do you think about when you read other people’s work? And who do you read?

LO: I think of writing as a mode of reading, reading as a mode of writing. Both are extraordinarily active practices, interactive ones, ones that are continuously in motion. That’s what’s tremendously exciting for me about sitting down with a book or before my laptop.

Samuel R. Delany once observed your writing is only as good as the best book you’ve read within the last six months or so. I like that thought. It motivates one to read widely, both across time and space.

So, let’s see, how to comment on who I read. Well, maybe emblematically. In the last week I’ve read a couple really amazing books: for fun, China Miéville’s The Last Days of New Paris and Maggie Nelson’s The Argonauts; for teaching Anne Carson’s Nox and David Clark’s hypermedial piece 88 Constellations for Wittgenstein. I’ve just started Carlos Fuentes’ Nietzsche on His Balcony.

And I find the ongoing conversation with my students continually energizing. This week in my graduate Experimental Forms workshop, for instance, one of them has produced a digital interactive fiction that keeps unwriting itself, while another has built an art book, based on a Mayan creation myth, that opens up, page by page, into a colorful three-dimensional flower as you read it.

That’s the kind of work that makes me want to get back to my desk as soon as possible and start writing — like our lives and aesthetics depended on it, which they do.

LO: Thank you! What a pleasure.