An Interview with Peter Mitham, editor of Amphora

Posted on February 7, 2017 by Ed Battistella 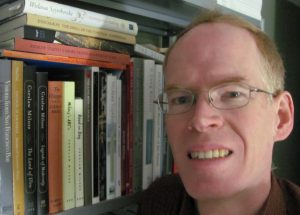 Peter Mitham’s writing has appeared in more than 80 publications worldwide. Based in Vancouver, Canada, he chronicles news and trends in real estate, agriculture and food for such publications as Wines and Vines, Good Fruit Grower and Business in Vancouver. His academic work includes a bibliography of author Robert W. Service (Oak Knoll, 2000). He has edited Amphora, the thrice-yearly journal of the Alcuin Society, since 2009.

EB: How did you get interested in book arts?

PM: I remember being sensitive to typefaces when I was a kid. I remember liking larger point sizes, but then gravitated towards the work of Grosset & Dunlap, which published the Hardy Boys books. In retrospect I would say I liked the layout, the way it made the adventure stories even more readable. I also collected stamps, and many of the designs Canada Post issued in the early 1970s reflected guidelines of designer Allan Fleming, who also produced the iconic logo of the Canadian National Railway Co. and assisted in designing the Hymnal jointly published by Canada’s Anglican and United churches in 1971. I recall Fleming’s work appealing to me at the time, and I would like to think it influenced my later interest in the book arts.

EB: What is the Alcuin Society and its journal Amphora?

PM: Based in Vancouver, Canada, the Alcuin Society formed in 1965 to bring together enthusiasts of the printed word – and the well-printed word at that – and support the likes of Wil Hudson, a small press printer who went on to work with the famous Inuit printmakers in Cape Dorset on Baffin Island. The society, a registered not-for-profit organization, now focuses on an annual Award for Excellence in Book Design in Canada. It also presents a medal for lifetime achievement or extraordinary contributions to the book arts in Canada, the Robert R. Reid Award. Its journal, Amphora, appears three times a year and serves the broader, original audience for the society – people engaged in everything from calligraphy and the book arts to book selling, collecting, and reading.

EB: What sort of people does the Alcuin Society attract? Can anyone join?

PM: Yes, anyone can join the society. The membership is international and made up largely of book collectors, librarians, and those engaged in small press ventures, design and the book arts generally. We joined forces with the Bibliographical Society of Canada on a national book collecting contest, and there’s some overlap in membership and interests with that group, too.

EB: Do you have some favorite books, design elements, or fonts? 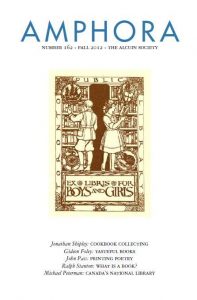 PM: Content determines my favorite books, so I would be hard-pressed to pick just one! Gaspereau Press does nice work, though, often with letterpress jackets and an obi (paper strip) holding them in place. With respect to fonts, I favor serifs and use Baskerville on my business card. I’ve gravitated towards Bell in recent chapbooks I’ve prepared for family and friends.

EB: I find that many people are interested in the book arts and have very strong opinions, but the elements are not taught widely. How can people learn more?

PM: Read, practice; repeat. I was fortunate to participate in a workshop on book repair at the end of Grade 7 or 8 – though the memory is dim enough that perhaps I was simply encouraged to consider participating! At any rate, the fact that it was even an option stands out. My real exposure came in university, where as a Master’s student I took a course in bibliography intended to help us understand how books were put together and the manufacturing process that created the physical texts I was studying (and how errors might have crept in). This prompted me to attend sessions that introduced me to what contemporary book designers and publishers were doing. I would occasionally make chapbooks, and continue to listen to and observe what others were doing. A more formal approach would be to register for workshops community centers and local arts groups offer, and combine it with reading and becoming familiar with the work and opinions of those whose work you admire. Robert Bringhurst and Andrew Steeves, and the essays in Devil’s Artisan and Émigré have all played a role in my formation.

EB: Are there some books about books that you’d recommend?

PM: Andrew Steeves, Smoke Proofs: Essays on Literary Publishing, Printing and Typography is a recent book that offers a good introduction to various aspects of contemporary book production; Robert Bringhurst, The Elements of Typographical Style is a classic; Emigre No. 70: The Look Back Issue–Celebrating 25 Years in Graphic Design is a collection of the magazine’s best essays that will have its fans. Read, and then follow up on dropped names to see what else you can discover.

EB: Any thoughts on restoration versus conservation of old books?

PM: Conservation comes first, helping books to age gracefully. I hope everyone has some knowledge of the basic principles (I learned some as part of work towards a badge in the Scout movement). Restoration is important for books that have suffered abuse, neglect and other misfortunes. (I have some that could benefit from that kind of attention!) There are certain volumes we prize as individuals and a society that benefit from restoration efforts, helping us to prize them for what they are rather than what the ravages of time have made them.

PM: You’re welcome – thanks for the opportunity.